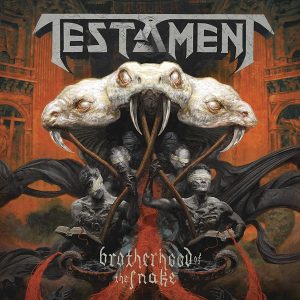 The Bay Area veterans are back with a record crammed full of their trademark visceral heaviness. Chuck Billy’s mighty raw is as powerful as ever and the rest of the band are firing on all four cylinders. Brotherhood of the Snake is the album Testament needed to make. From the ferocious title track, through to The Pale King and Stronghold the pace is unrelenting and demonstrates that the band can still pack a punch and please the old school doubters. Seven Seals sees the band play the technical card and flex their technical muscles and Born In A Rut is as resolute as it sounds and will have all in earshot taking heed of its underlying message. Testament are progressing, it’s true, but it’s also great to hear them snatching back some old school attitude and aggression which they do in spades in Brotherhood of the Snake. These guys wipe the floor with the so-called Big Four! Mark Freebase