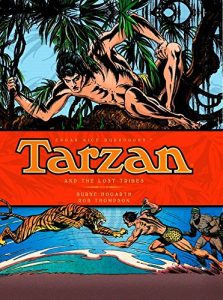 “The startled Matabele reeled, screaming in pain, as the crude spade sheared through the flesh of his face to the bone.” Brutal stuff indeed, and I bet you’re thinking it’s Tarzan wielding that spade, right? Well, you’d be wrong; it’s Jane.

Welcome to Tarzan And The Lost Tribes, Volume 4 of The Complete Burne Hogarth Comic Strip Library. Collecting the “Michelangelo Of The Comic Strip”’s work from December ‘47 to October ’49, a period in which the blurb describes him as being at the height of his powers, it’s not wrong: this is everything you could want from Burroughs’ eponymous ape-man and his mate, from Nikima, Tantor and the rest – iconic Tarzan, edgy Tarzan … Tarzan, as it were, in the raw. The stories gathered here – Tarzan And N’Ani, Tarzan On The Island Of Mua-Ao and Tarzan And The Ononoes – capture almost perfectly the balance between the feral and the fantastic that was, and remains, this world’s unique appeal. I say ‘almost’ because over the years that balance wasn’t always found, tipping at times into the too mundane, at others into the too bizarre, and such is the case with the final story here. But fear not, before you encounter the infamous Ononoes you’re treated to the ex-circus big-cat trainers and their arena of death; giant idols and flooding caverns within the Mountain Of Diamonds; Doctor McCrae and his atomic Japanese submarine’s search for the legendary ‘First World’; not to mention the perils of Umedemu The Pirate and the killing-machine known as The Striped Death. There are also more human-sacrifice-happy tribes and cannibals than you could count on two hands, assuming they hadn’t been chopped off or eaten first. It’s a heady mix leading to the appearance of (what) ‘resembled a gigantic head with pointed ears and short, muscular arms’. God only knows what was going on here, but The Lord Of The Apes thereafter finds himself rescuing the beautiful Barbara Ransome from the Ononoes’ capital city, Omolos, there kidnapped fifteen years before, presumably so the Ononoes could weeble and wobble in frustrated desire. Coupled with characters like Wollo, The Chief Of The Waloks, this final story is, frankly, a bit daft. But you know what? It doesn’t matter. Hogarth’s art is as stunning as everywhere in this tome, and in the end, is all that matters. There’s one panel in …On The Island Of Mua-Ao where Tantor the elephant watches Tarzan carried away on the atomic submarine, and in a few strokes of leaves and use of shade, Hogarth makes you feel for Tantor – you’re missing Tarzan, his human friend, as much as he is; you’re in the elephant’s head.

With all content lovingly restored, and both Tarzan and Hogarth in their golden moments, there’s really nothing here not to like. Prepare yourself, though, because disorientingly the final pages flip vertical to horizontal. Happily, it’s no production flaw, but what actually happened to the strip later in its run. Clipped and fiddled with in various syndicated markets, the pages are here reproduced in their rarely seen and original format – to be continued throughout Volume 5 – and they’re worth the admission alone. Buy the book and let illustrator Joe Jusko in his enthusiastic introduction explain this better than me. You will thoroughly enjoy what he introduces. But in doing so, please, try not to laugh at the Ononoes. There’s one out there somewhere, watching you with its gigantic and possibly tearful eyes. After all, it couldn’t help being born an Ononoe.  Mike Wild