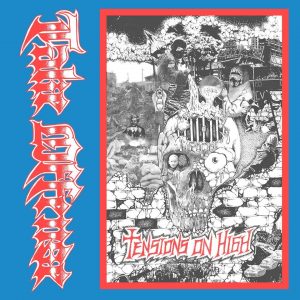 Imagine if, twelve months before they recorded Born to Expire, Leeway had packed their bags and moved across country to Venice Beach, where they then immersed themselves in skate and surf culture and spent their evenings hanging out with Suicidal Tendencies and playing shows. That mental image is pretty darn cool isn’t it?   Well, you don’t need to imagine what would have happened, or what might have been, anymore because Take Offense are the band that Leeway would have been if they’d upped sticks, become California natives and had hooked up with Mike Muir and company.  These dudes specialise in bruising, high energy crossover and put a little extra zing in their beat-down and mosh laden tunes that you can both groove and slam to. They’ve put a mile wide smile on my jaded old face and if they can do that to me, then I’m sure that all of you kids out there in Hardcoreland and Thrashville are going to get all kinds of fired up and excited when you get down with Tensions on High. I think Randy Savage would have summed up Take Offense and Tensions by simply saying “Ooooohhhh yeeeaahhh”. And you wouldn’t want to argue with Randy* would you? Damn right you wouldn’t…. Tim Cundle

*I know Randy’s dropping elbows on many suckers on the other side of the veil, but he was, is and always will be cool and he always get the last word. If Take Offence are good enough for the Macho Man, then you can bet your last pair of Converse that they’re good enough for you too. And that’s an end of it.