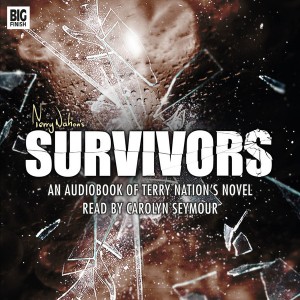 Survivors – Written by Terry Nation & Read by Carolyn Seymour – 6xCD / Download (Big Finish Productions)
There’s a popular, and in this day and age, slightly over-used adage that proclaims that no society is more than three meals away from anarchy; and while that may be true, what is certain is that society as a whole is just one pandemic away from complete, global collapse. ‘Survivors’, the book written by Terry nation and based on the series that he created for the BBC in the mid-seventies, explores the very plausible, and at times all too realistic, possibility of just such an event, and follows a small group of ‘Survivors’, who in the wake of the sickness that has devastated the world as they (and we) know it, gather together in an effort to try and rebuild a new world from the ashes of the world, by returning to a more agrarian way of life.

‘Survivors’ is a bleak, dark story that doesn’t pull any punches or tread softly in an effort to spare the listeners sensibilities, instead it paints a picture of the day-to-day struggle to survive in the wake of mass death in a world without technology, electricity or basic amenities. Focusing on Abby Grant and Greg Preston, and read by Carolyn Seymour (who played Abby in the original series); it portrays their daily hardships as they find themselves having to begin again from scratch. Incorporating a number of sub-plots, such as Abby’s constant search for her missing son Peter, who she hopes against hope survived the plague, ‘Survivors’ charts the beginning, development and eventual end of Abby’s commune, and her groups attempt to build and discover a better life while facing raiders, bandits and the worst elements of human nature, which unfortunately, and inevitably, come to dominate the behaviour of the majority of the survivors. Chilling, upsetting and harsh, ‘Survivors’ is nevertheless engrossing and captivating, even though you know, somewhere deep inside that it isn’t going to end well. It is a truly remarkable story that features a shocking, almost numbing finale, a story born out of a fear that the world could end tomorrow and there’s nothing that anyone, anywhere could possibly do to prevent it happening. Just remember, there’s no such thing as a happy ending… Tim Mass Movement