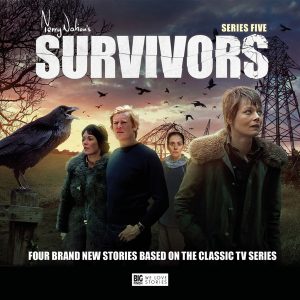 Nightmare visions of a post-apocalyptic world have been a staple of fiction since Mary Shelley’s The Last Man was first published in the early nineteenth century. However, it wasn’t until the aftermath of the Nagasaki and Hiroshima detonations and the realisation that humanity now possessed the power to destroy itself many times over with a single push of a button, that the genre, in all of its forms, really became a part of the mainstream consciousness. Survivors, rather than following the stereotypical norm of the seventies, took a leaf out of Shelley’s book and imagined what life would be like for those who survived a plague that wiped out the vast majority of humanity instead of clinging to the – at the time somewhat overused – idea of everything ending in nuclear fire. It was (or so I’ve been told because even though I’m old, I’m not quite that old) a bold, brave series that tackled issues that society would rather have ignored; shirking away terrified by their very idea, let alone existence. While it was considered dark, bleak and painfully honest at the time, it was nowhere near as brutal, blunt and forthright as it has since become in its revival by Big Finish. Now in its fifth series, Survivors has become progressively grim and unforgiving as its main players desperately try to adjust to life in a world where the old rules just don’t apply and all that really matters is survival. But, even though the stories around which the series has been built are often devastating, they are also gripping and taught and invite the listener in to sit around the campfire and share the struggles, troubles and joys of the characters as they attempt to rebuild their lives.

Told over the course of four interwoven, linked stories The Second Coming, New Blood, Angel of Death and Come the Horsemen, Survivors Series Five tells the story of those who lived through the original plague’s worst fear, that it would return to continue its deadly work and explores the impact and effect that the mutated form of ‘the Death’, as the virus came to be known, has on the fragile society that had arisen in its aftermath. Part tragedy and part thriller, it charts the “heroes” (Abby, Greg, Jenny and Evelyn’s) attempts to inform the settlements about this new strain and to try and trace and isolate the source of infection before it can spread its wings too far and annihilate what little is left of humanity. It’s unflinching, candid and often shocking cat and mouse plot sends the protagonists, for both personal and altruistic reasons, in pursuit of ‘Typhoid Mary’, pushing the underlying tension to, and yes I know it could be considered bad taste to say it given the main theme of the series, fever level. And once again it isn’t afraid to dispose of its major players, because at the end of the day, what difference do one or two more deaths make in a world beset by the Grim Reaper? The writing is superb, effortlessly mixing personal drama with it’s all too believable and realistic plot and displays an innate understanding of human nature while the cast are exemplary, adding gravitas and depth to the nearly unimaginable horror of the terrifying situation that the characters find themselves in. However, if you’re not already a fan of the series or aren’t familiar with it, Series Five isn’t the place to try and dive headlong in, as it relies on the listener having at least some understanding of who everyone is, their back stories and how they fit into the Survivors mythology and definitely shouldn’t be viewed as a standalone saga. That said, if you are a fan (and if you’re not, then you should really be asking yourself why not and doing your damndest to rectify that as soon as possible) and you are familiar with the series, then you’re going to love every single second of the rapidly unfolding drama that lives at the heart of Survivors Series Five. Survival is everything… Tim Cundle