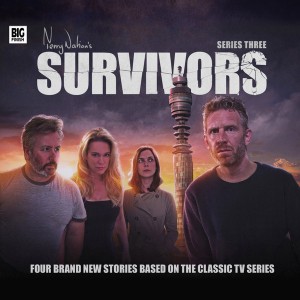 Remember Terry Nation’s series from the seventies, ‘Survivors’? Or the ill-fated, despite it being very good, reboot from the last decade? You do? Good. Remember how dark, disturbing and frightening they were, and could be? Magnify that darkness and fear tenfold, wrap them up in set of compulsive and strangely alluring stories populated intelligent, endearing, well written and developed characters (especially the truly repulsive John Vincent in whom all of humanities worst traits seem to manifest themselves), both old and new, and you’ll have a good idea of how good this series of ‘Survivors’ is. It’s everything that both of the BBC series should, and could, have been and more. But, it’s also a brutal, emotional rollercoaster that doesn’t shy away from confronting the worst aspects of human nature head on, while examining and exploring the lengths that people are willing to go to in order to survive in the new world.

This time, the action shifts from the established set-up, as Abby, Daniel and Molly, now based (at least temporarily) on Jimmy Garland’s estate, set out one again to find Abby’s son Peter.  It’s a journey that propels them into direct conflict with John ‘Vinnie’ Vincent, a vile, psychotic neo-nazi bully and the self-elected head of the ‘British Government’. From the confines of an isolated ferry, to the heights of the Post Office Tower (I know it’s the BT Tower now, but hey this is the seventies) and the seas of the English coastline, Abby and her allies and Vinnie and his cronies wage a war of attrition against each other in the battle for survival in the new world. Old faces reappear, new faces disappear and death is never far away in the harsh, violent new world where life is more fragile than it’s ever been. It’s a world where sacrifice, hope, despair, suffering, misery and happiness collide in a miasma of conflict and raw human drama.  Gripping, and oddly fascinating, ‘Survivors’ plunges its audience into the heart of the gloom and shadowy darkness that lies at its core, before allowing them to emerge, battered, bruised and scarred, but strangely sated and fulfilled as it reaches its climax. If happy endings and everyone skipping off into the sunset at the end is your thing, then maybe ‘Survivors’ isn’t for you. However, if you enjoy original, inventive and imaginative character drive story-telling at its finest, then you need to hear ‘Survivors’. You don’t want to hear it. You need to hear it. It’s that simple… Tim Mass Movement