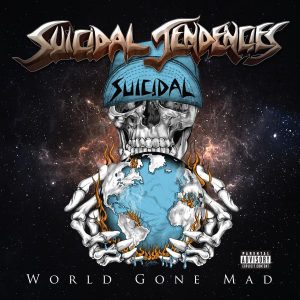 The last time I bought a Suicidal Tendencies album (1994’s Suicidal for Life) that wasn’t one of their 80s classics, I regretted it. I bought it at the show and even got it autographed by the band. I ended up selling that to one of my friends for half of what I had paid for it. As a result, two decades passed before I was excited about hearing a new ST album. Today I listened to World Gone Mad! for the first time and…IT’S AWESOME!! I don’t know if it’s just having Dave Lombardo in the drum seat or if some other series of events has revitalized the band but whatever it is, I hope it sticks around for a while. From the anthemic One Finger Salute to the blood-stirring Get Your Fight On! to deeply meaningful album closer This World, ST has breathed new life into their music. And it doesn’t hurt that they’re heavier than ever, at least in my opinion. Jim Dodge

It’s always exciting to hear new material from Suicidal Tendencies.  It’s even more exciting when you know they’ve recruited your all-time favourite drummer –Dave “Slayer” Lombardo – a perfect marriage as far as I’m concerned. Recent S.T albums have been guilty of over exuberance in the drum department, in my humble opinion. Too much funk-not enough punk. World Gone Mad is the album that corrects that. This Suicidal doing what they do best. All the classic S.T elements are here. Slick thrash riffs combined with energetic punk rock riffs, intricate bass work, rock solid drumming, and of course life lessons and random musings spat at us by the enigmatic Mike Muir.

The album kicks off with Clap like Ozzy, punk rock homage (of sorts) to the legendary Black Sabbath singer. The New Degeneration provides us with one of those beautiful chugga, chugga riffs that Mike Clark and Rocky George used to produce in their sleep. With a song title like Get Your Fight On you wouldn’t expect a “I wasn’t meant to feel this…” sort of opening”, which is all well and good, but that’s quickly quashed by the furious thrash spouted by the current guitar duo of Jeff Pogan and Dean Pleasants, who are on fine form here. The stand out track on World Gone Crazy, for me anyway, is the anthemic One Finger Salute. A classic hardcore track complete with sing along bit-glorious! The aforementioned duo of Pogan and Pleasants seem to gel neatly with Lombardo’s frantic drum style and whilst there are plenty of Lombardo signatures, they don’t saturate the album.

As with so many other classic bands, the problem Suicidal face is that they have a back catalogue that is so iconic and held so dear in so many people’s hearts, that it can never be bettered. That said though, World Gone Mad is the best Suicidal Tendencies album I’ve heard in twenty odd years and although it doesn’t top any of the sacred first four albums, it certainly gives them a run for their money…… Chris Andrews