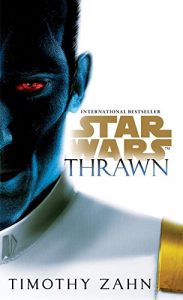 The Star Wars “extended universe”, often throws up a character so good and fully formed that they warrant further attention. Readers will have their fingers crossed that we don’t have a “Star Trek Crew Member In A Red Shirt” so that a good guy can be offed or make that noble sacrifice to save the sacred characters who simply cannot be killed off. After all, what’s the point of Leia, Luke, Han and Chewie getting in to a perilous predicament if we know that, however inescapable the situation is, a way to escape will always be found? New characters add that unpredictability. We are not so certain of their fate. Dash Rendar is another that springs to mind … The same goes for the other side. Darth Vader will always prevail won’t he? What about after Vader and the Emperor are gone though? Who will step in to their Sith-y shoes then? Will it be just another big, bad boogie man figure that is all dastardly deed doings before finally meeting his end in a big showdown with the good guys? Well, before Disney took over and pretty much wrote off thirty years of novels, comic books and other Wookiepedia canon events the first signs of the new order appeared when we met the tactical genius Admiral Thrawn. A blue skinned alien (or “Chiss”) who had rose through the ranks of the Empire’s military appeared and filled the power vacuum left in the wake of the Battle of Endor. The Thrawn trilogy – as it became known – by Timothy Zahn is one I remember fondly. Snapping up new Star Wars stories with new characters that continue the web spun by Mr Lucas was the order of the day back then. In Thrawn, we had a very different leader of the dark side of our favourite space conflict. A more measured and cerebral villain who’s tactical genius was unparalleled. Thrawn presented a very different challenge to the rebel alliance who now had the upper hand. Those heady days of the early 1990s seem a long way off now …

What we have here then, in the novel that sees Zahn return to one of his most enduring creations, is a sort of Full Metal Jacket for Thrawn. Without the jungles and guerrilla warfare though. Thrawn is discovered on a remote, woodland world and runs rings around the Imps who “discover” him. Cut a long intro short and our “hero” finds himself hauled before the Emperor himself in the Imperial Capital of Coruscant. Despite his well known racist tendencies, the Emperor overlooks the blue skin of our interloper and he is cast in to the Imperial Naval Academy to learn the ropes. Alongside Thrawn, Eli Vanto, a young cadet from a backwater planet that knows and tells tall tales of the semi-mythical Chiss warriors of legend, is assigned to Thrawn as his “interpreter”. That’s interpreter in the sense of language and culture as the Chiss recruit takes a while to get accustomed to the murky world of Coruscant politics. Every level of seniority in the Empire is rife with eager go getters, out for themselves and who they trample over to get what they want matters not. From jealous cadets to Moffs and Grand Moffs … even the one and only Tarkin puts in an appearance … it takes Thrawn some getting used to. These early parts of the story are the strongest as Thrawn applies all his cunning and outwits a number of his supposed betters. All the while Vanto is taking notes and learning from the master. The relationship between the two makes for an interesting narrative as the ascendency of the Chiss cadet is seen through the eyes of his interpreter and eventually friend Eli Vanto. On top of this, every time Thrawn is involved with some form of interaction, his observations are given in italics. Body language, breathing rate, minor ticks and movements. This insight in to Thrawn’s deep analysis of everything he sees goes some way to hammer home that this blue skinned outsider is not just your average tactical genius. Upon graduating from the Academy Thrawn is set off on a number of adventures where he can put to use his wily and unpredictable ways in service to the Empire.  Parallel to the tale of Thrawn we also see the rise of another major character who will eventually cross paths with the Chiss. Raised on a mining colony in a forgotten corner of the galaxy Arihnda Pryce is destined for more than just running her family mine and she too is sent to Coruscant to begin her ruthless rise in the twisting and turning world of Coruscant politics.

Once the two main thrusts of narrative are established we get to the main tale. Doonium, a very precious metal is suddenly in great demand. The Empire are taking over and buying up any possible stream of Doonium for reasons that are shrouded in mystery. Talk of a big, secret building project is discussed in hushed terms that intrigue both Miss Pryce and Thrawn. On top of this Thrawn has gone all Captain Ahab/Moby Dick about an insurgent who goes by the code name Nightswan and spends his time putting a spanner in the works on mining worlds that will bring all three of these protagonists together.

This isn’t your typical Star Wars adventure. Nope, there’s no Han and Chewie outrunning TIE fighters, no light sabre duels and none of the comical droid capers that you’ll normally find. Equally there’s no dark side magicks going down, no throat choking Siths and Jedi heroes saving the day. Three quarters of the book details Thrawn’s rise and the shaping of a Grand Admiral that will dominate the Thrawn trilogy that I fancy rereading now. Instead of the action and adventure, Zahn delves deep in to the shady world of deal making and betrayal, of political subterfuge and it really pays off. Thrawn and Pryce are both initially wet behind the ears but both adapt very quickly and learn to play the game. The insight in to Thrawn’s observations and analysis is initially a really intriguing and captivating device. Likewise seeing the transformation Arinhda makes is equally compelling. We are all set up for a grandstand finish in the final quarter then and well, it doesn’t quite deliver. After a number of tactical victories and promotions, Thrawn’s biggest challenge yet is well, another clever tactical victory where you can’t quite, along with Eli Vanto, fathom out what he’s up to and then are amazed to discover he had it in the bag all along. By the final act I was looking for something more but the ultimate ending links up the story with the established Star Wars time line. So now we know what Thrawn did before the Empire and we know what he did after the Empire. What then I ask, did he do, during the days of the Empire? Thrawn and Vader in the same room? Now that would be a tale worth telling. Marv Gadgie