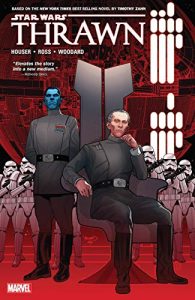 Now here’s a challenge. The novel Thrawn by Timothy Zahn revisited the story, and shoe horned it in to the new Star Wars timeline, of the blue skinned Chiss warrior Mitthr’raw’nuruodo, or Thrawn to his human acquaintances. Originally an “extended universe” character from the very, very beginning of the “extended universe”, in the trilogy of novels that started it all off in the 90s, Thrawn was an exotic master tactician who was discovered by the Empire and despite the Emperor’s notorious racism towards alien races, rose through the ranks to be the head honcho in the post-Return of the Jedi Star Wars world. These heady days of new Star Wars material are behind us now though and are mostly consigned to the “no longer canon” corner of Wookie-pedia. Thrawn however, is far too good a character to just write off in the way that the great big, giant floppy eared bunny with a blaster was from the colourful, and often deranged, Marvel magazine comic strips of the late 70s and early 80s … And so the revisionism starts here! The only problem with this graphic novel is the source material was probably far more suited to the novel format rather than the bright and breezy comic book style, but that turns out not to be a problem at all. Tales of corruption in the corridors of power, Grand Moff’s conniving against each other to gain an advantage, ruthless power grabs where, like here in the real world, politics is just an arena for stepping over everyone else to reach the top and damn the consequences. I’m alright Jack.

Kicking off deep in the jungles of some far flung planet, the tale introduces the wild and rugged Thrawn as a mysterious presence who torments an entire Imperial squadron. His origin story has not changed at all from the “Thrawn Trilogy” and it’s not long before of our blue skinned anti-hero is presented to the Emperor himself and despite the misgivings, back stabbing and jealousy of the Imperials top brass and cadets alike, rises through the ranks quicker than a womp rat up a drain pipe. Thrawn is assigned an assistant in Eli Vanto, a cadet from a back water with mundane ambitions. The two make for a sort of Holmes and Watson in space double act, with Thrawn’s tactical genius humiliating the established great and good of the Imperial fleet, while Vanto helps him along with understanding the more subtle aspects of politics, social relationships and interaction. A second parallel narrative developed within the pages of Timothy Zahn’s original novel, dealing with Arihnda Price, a woman with burning desire to see firstly the governors who swindled her family out of their mine suffer, but secondly, as she delves deeper in to the murky world of Coruscant politics, to rise through the ranks herself in the all consuming quest for power. In this condensed version, the two stories cross paths much sooner which speeds the tale up but doesn’t flesh out Arihnda as much as I would like. At one point, when she carries out a very ruthless act, her actions seem pretty out of synch with what we have seen so far, but back in the pages of the novel, it acts as sign of how far she has become immersed in the merciless and callous world in which she becomes yet another turning cog. At the top of these turning cogs sits Grand Moff Tarkin himself. The epitome of Imperial evil. Throw in a terrorist organisation, lead by the mysterious “Nightswan” and not a Skywalker or Alderaanian Princess in sight, and we have a concoction of bubbling strands of story that all come to a head in the final act where the ambitions of all involved, whether they be they of a political motivation, linked to family loyalty or the great galaxy wide conflict that is always raging in any Star Wars tale. It’s also a nice touch when you fathom out what all the doonium metal is being stockpiled for …

The key protagonists – Thrawn, Vanto, Arihnda, Nightswan – are all drawn extremely well with the added twist that none of them are the types that you would traditionally side with in Star Wars. Seeing Thrawn take on and show up the pompous elite of the Imperial Navy is great fun mainly as he comes across as lacking the arrogance associated with such figures. Seemingly bamboozled by social etiquette and political wrangling, he comes across as a more ruthless Spock cum Sherlock. Vanto drinks it all in as his, frustrated at times, PA but is wise enough to pay attention to a master class in plotting and battlefield tactics. Arihnda is a most intriguing addition as her motives appear to twist and turn and allegiances seem more fluid. At the end of the day though, they are all Imperials and the fact that the reader may distinguish between the “good bad guys” and the “bad bad guys” is what keeps it all ticking along in somewhat gripping fashion.

Don’t pick this up if you are looking for the usual round of derring-do, blaster fights, close shaves and manic last minute escapes as you won’t find what you are after. What you will find is a thoughtful and intriguing world of back stabbing politics on and off the city planet at the centre of the universe and an insightful examination of the internal workings of the Imperial power brokers. It’s clear to see that even in a galaxy far, far away, absolute power corrupts absolutely … just like on down here Earth. Marv Gadgie