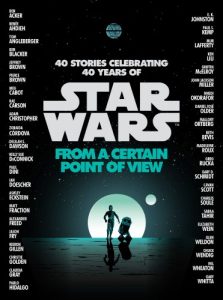 As ideas go, From a Certain Point of View, is not only intriguing, it’s the button that ignites the light sabre and the slowly unscrewing top on the bottle of Blue Milk of enticing concepts to have emerged from that galaxy far, far away.  It’s the story of George Lucas’ original film told from the perspective of forty incidental characters, who up until now had been at best two minute plot devices lurking in the background of the Rebellion’s mission to destroy the Death Star. Exploring the idea that everyone is the hero in their story, From a Certain Point of View spreads its arms wide and retells the most familiar of tales in an intriguing, involving and thoroughly absorbing manner.

From Raymus Antilles, to the Stormtroopers who thanks to Obi-Wan (who also features in this tome) missed the droids they were looking, Greedo to Dex Tiree, the Garbage Compactor monster to the Jawa’s who “found” Threepio and Artoo, the bystanders and passers-by who enabled and helped Luke and company moves from point A to B on onward to C, are finally given voices and identities and allowed to share their stories and their part in the struggle against the Empire. Each and every story expertly humanises its central character and ensures that in the in the readers imagination they become far more than just blaster targets, Bantha fodder, numbers on Imperial and Rebel rosters and half glimpsed faces destined to disappear into, and become lost, in the swarming crowds of rapscallions and scoundrels of Mos Eislely.

Every tale is written with passion, energy and a zeal that allows its subject to take their long overdue places in the mythology of Star Wars and for a book of this size and scope, it’s nearly impossible to single out any one author whose contribution vastly overshadows the others  (although Nnedi Okorafor, Wil Wheaton, Cavan Scott, Matt Faction and Sue DeConnick come pretty close to doing so), it’s also an absolute joy to see four colour writers like Charles Soule, Greg Rucka, Keiron Gillen and others succesfully flexing their literary muscles in this collection. There isn’t a story that won’t capture your imagination and make you rethink the chapter of Star Wars in which it happens, makes you see the story in a light and question everything you thought you knew about the Rebellion, the Empire and the millions of souls caught in the middle of their conflict. The Force is strong with this one… Tim Cundle