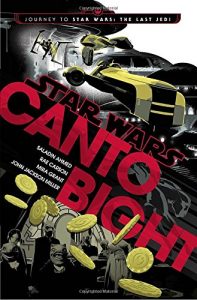 Quite honestly, I approached this book with a lot of caution. After seeing The Last Jedi, one of my main gripes was the casino planet of Canto Bight. The whole reason for going there in the first place, was a bit pointless, but more than that, for me it didn’t look like a Star Wars planet. Dare I say, it looked like a Star Trek planet. They seemed hell bent on cramming as many crappy looking creatures into as many shots as possible. No, I didn’t like it.

So now I’m given the task of reviewing a book based purely on this abomination. I wanted to hate it, but I just couldn’t. Yes the backdrop still pissed me off, but great storytelling is great storytelling and there are four great examples here. Aside from John Jackson Miller, who amongst other things in the Star Wars world wrote the brilliant Kenobi, the other writers have no experience in the Star Wars world which is refreshing and they all do a stellar job in opening up this world for us, with four novellas set on the same fateful evening. For my money the pick of the lot comes from Saladin Ahmed with Rules of the Game where we are introduced to hapless salesman Kedpin Shoklop, who through his job has won himself an all-inclusive vacation of a lifetime to Canto Blight. Coming across as a more lovable Jar Jar Bink’s kind of character, the ever positive Shoklop is soon at the mercy of the city’s ruthless inhabitants, who will do anything to make a buck, including Anglang Lehet an assassin looking for a patsy in one last hit.

I’m still not a fan of the visual aspect of Canto Bight, perhaps it has a larger role to play in the grand scheme of things, only Disney knows, but this book has gone some way to smoothing over the cracks. The four writers together have made Canto Bight sleazy enough to rival Mos Eisley’s famous Cantina and that’s alright by me...Chris Andrews