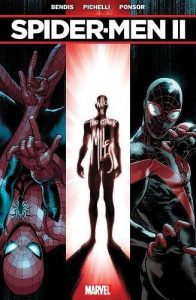 Everyone, according to urban legend, has a doppelganger. Somewhere out there  your exact double, is walking around with your face and living a life much like yours. It’s sort of weird knowing that isn’t it? But what if that double didn’t just look like you, but was you? That’s the dilemma that Miles Morales faces, and becomes obsessed with, in Spider-Men II, as he realises and struggles to come to terms with the knowledge, that having come from a parallel Earth, he has an exact counterpart on the world that he now calls home.  And with a helping hand from Peter Parker, the other Spider-Man, in Spider-Men II Miles determines to discover all that he can about his other self. But, in true Spidey fashion, some things really are best left alone and as Miles soon discovers, the other Miles is one of them. His overwhelming curiosity catapults the Spider duo headlong into danger and conflict with Taskmaster and an ever deepening mystery surrounding illegal travel to another world that really shouldn’t, thanks to most of other worlds going kablooey in the not distant past, exist.

While Spider-Men II contains enough web-slinging action to keep even the most ardent wall-crawling fans happy, it isn’t really about superheroes. Or more accurately, it isn’t about the things that superheroes usually spend their days doing. You know, the whole saving the world and vanquishing evil thing. It’s about the individuals behind the masks, the moments in their lives that shape and define them, how nobody is really what they seem to be, that people are far more than just the career choices they make and how friendship, loyalty and love are often found in the strangest of places and can, and often do, become the defining forces in life.  Mostly though, it’s a story of self-discovery, or finding out who you are, what it is that you want and about knowing when to step back from the rat race and seize chances and opportunity when they presents themselves. And it’s also all about Miles Morales. Both of them.

Just when I thought Brian Michael Bendis couldn’t surprise me, or make me love his work anymore than I already do, he goes and pulls this rabbit out of his hat. Spider-Men II proves that you don’t need huge, world threatening events in superhero books to make then intriguing and involving, and that sometimes less is more in the costumed crusader world. It’s an intensely moving and personal tale, and in some ways Miles journey throughout the story reflects the authors (not so) recent move from everything that was familiar to him to pastures new and uncharted, that’s beautifully illustrated by Sara Pichelli. And it features an ending that reinforces the notion that the future is unwritten and the direction that it takes is entirely up to each and every one of us and dependent upon the decisions that we make. Incredible… Tim Cundle