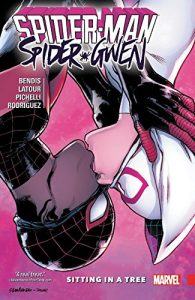 They seek them here, they seek them there, they seek those Spider-Folk everywhere, are they in Heaven or are they… Well no, they’re not actually. They’re, just  like most superheroes, multi-dimensional crime fighting crusaders who are a little different in each and every parallel timeline and state of existence. Miles and Gwen bump into each other again, when the former – on a mission to save his dad who went missing on S.H.I.E.L.D. black op – jumps into the latter’s home dimension, which in turn initiates one heck of a spider-team up when Gwen decides to help Miles out. After all, Spider folks always help each other out. Unless Venom or Carnage are involved, but they’re not, which leaves Miles and Gwen free to try and find his father. It’s no easy task, as their joint endeavour brings them into the sights of the Scorpion, a secret S.I.L.K. super weapon and gadget smuggling ring and a plan to raid all of the multi-verse with the aid of villainously secret new dimensional jump technology. All of which Spider-Man and Spider-Gwen have to deal with while searching for the errant parental figure and S.H.I.E.L.D. agent and trying to come to terms with their evolving emotional attachment, which is, if the chronology of a certain universe is to be believed, destined to become a big deal. A really big, really important world shaping deal. But that’s the future, and in the here and now, they’ll just be happy to get through the day without getting lost in a karaoke dimension or Nolte world (yes, these things are out there. I know, it’s a scary though isn’t it?), stopping S.I.L.K. and the Scorpion and saving Miles’ dad.

Let’s face it folks, Sitting In A Tree was always going to deliver big and then some and not just because of the team –up that lies at the heart of the story. It was always going to hit the ground running with all guns blazing because of the writing and artistic team-up that created it. I mean, come on, Bendis and Latour? Pichelli and Rodriguez? Together in one book? That’s like the stuff that dreams are made. Well, it’s the stuff that mine are made of anyways. Along with V8’s, all you eat pizza and burger places and spaceships.  Filled with smart, punchy dialogue, rapier sharp characterisation, a fast moving and shifting central plot that also probes ideas of predestination and the individuals place in this, and every other, universe and eye popping, jaw dropping artwork, Sitting In A Tree is a four colour bone fide, spider powered home run.  That’s right folks; Bendis, Latour, Rodriguez and Pichelli have knocked it right out of the park with this one. Swing batter batter, swing… Tim Cundle