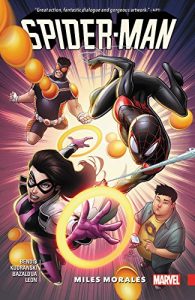 There are only three things in this world that you can rely on.  The slow, lazy, endlessly comforting burble of a V8, pepperoni pizza with extra jalapeno’s and Miles Morales.  Together they’re a no brainer holy triumvirate of pleasure that’s guaranteed to put a smile on my face every single time one of them pops up on my radar or magically appears to brighten my day.  Miles may have only been a part of the super-powered, costumed fraternity for just over half a decade, but he’s made one heck of an impact and in his short tenure and has managed to rise to the top of vigilante mountain. And his spectacular ascension is due in no small part to the consistently remarkable, intelligent and oddly believable way in which his character has been guided by the hand of his creator, Brian Michael Bendis.

In this, the third collected volume of his solo adventures, the delicate house of cards that Miles and his father had constructed to protect his identity and keep his mother safe comes crashing down around them after their return from their escapades with Spider-Gwen on a parallel Earth. Then when his unusually tumultuous personal life is pushed that little bit too far, Miles reaches breaking point and, in the wake of a friend being hospitalised after a brutal showdown with one of New York’s oldest established super-villains, goes looking for revenge. It’s a quest that doesn’t end well for either Miles or his newest, bestest enemy and sends him into a spiral of self-doubt that drives him to Tokyo (and into another conflict with another big bad) as he questions his role, and future, as Spider-Man. And all of the personal drama, super-hero showdowns and twisting, turning and incredibly readable and enjoyable narrative contained within these pages is hyper-compressed into just six brain popping issues, all of which are present and correct in Miles Morales Volume Three.

Now that he’s left for pastures new at DC, there’s absolutely no doubt that Marvel are going to miss Brian Michael Bendis, and even if they don’t, I’m going too. I’m going to miss his deft touch, wonderful gift for dialogue, innate understanding of human behaviour, picture perfect recall of what it was like to be a teenager and ability to spin a damn good yarn. And while I’m sure that Miles will end up in good hands, it just won’t be the same. How can it be? He’s not going to be written by Bendis anymore. So enjoy their partnership while you can and immerse yourself in Miles’ life as authored by Brian and the supremely gifted team of artists who, between them, have made his vision a reality in Miles Morales Volume Three. Nothing lasts forever… Tim Cundle