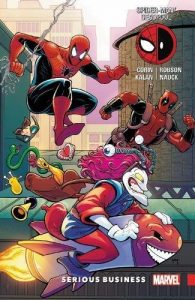 What’s that Timmy? Spidey and Deadpool have gone and caught themselves an overwhelming case of the “seriouses”, ridding themselves of wise cracks and dedicating themselves to earnest, no-nonsense crime fighting? Say it ain’t so, tell us that the jokes aren’t over and that the fuller figured lady hasn’t sung, called time on or attempted to ring the final bell on the four colour, costumed Laurel and Hardy’s absurd antics… Well yes and no. Yes, in that it’s one of the central ideas that lie at the heart of Serious Business, as Spidey, overcome by guilt, remorse and the belief that he’s responsible for another innocent death, and inspired by the circumstances that have led him to that point, sets out do his good deed for the day. And no, as that saying about good deeds and punishment catches up with him and then some and when you’re in a tight spot, sometimes you’ve just got to laugh or you’ll go as crazy as Wade. With Slapstick, mobsters and an elusive roll of photographic negatives to contend with, Pete and his partner in super heroics soon discover that the world and the events that set them on their path aren’t as black and white as they were led to believe they were.

There’s no rest for the wickedly funny though and almost as soon Spidey and Deadpool emerge from their laugh free desert, they’re catapulted halfway around the world and plunged up to their eyeballs in murder, killing and death in all of its many shapes, guises, flavour and varieties  when Arcade decides to make them his playthings and “invites” them to take a spin in, and try out, his brand new version of Murderworld.  With Deadpool being offered fame and fortune if he’ll just turn a blind eye to, and help out a little with, a teeny tiny bit of homicide and Spider-Man once again having to assume the mantle of great responsibility, our cheery chums have to find a way to get back together and turn the tables on their host. And in a blink and you’ll miss it bout of frenzied day saving action, they turn their Murderworld frowns upside down and get down to, and on with, the business of foiling the dastardly plans of the villainous rogue who’s put them and bunch of typically ungrateful civilians in harm’s way.

It’s a perfect partnership. And I’m not talking about the masked avengers who circumstance forces into another team-up. No sir*, I was referring to the fevered minds responsible for bringing their adventures to the pages of Serious Business. Corin and Kalan serve up outrageous laughs, characterisation and plot(s) that combine with the vibrant, flowing and richly detailed art of Todd Nauck and Will Robson to create a cordon bleu visual and literary delight that’ll tickle the funny bones of even the most po-faced, giggle free comic devotee. It isn’t easy being funny, just ask any comedian and they’ll happily tell you how hard it is. Unless you’re Pete and Wade, and then the whole saving the world and making it laugh while you’re doing it is just second nature. It’s easy-peasey, lemon squeezy… Tim Cundle

*Or ma’am. Whichever you prefer