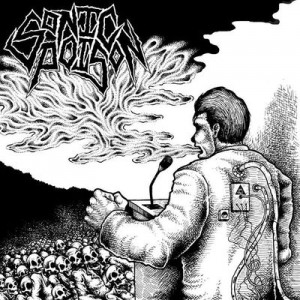 Sonic Poison – S/T 7″ (Lifeline)
Those attentive ones amongst you will recognise the name of this new NYHC band from the interview we did with vocalist Ron Grimaldi in our New York Hard Core special edition of MM (what do you mean, you haven’t read it?! Go and download it HERE). Although this band has only been going for approximately five minutes, they have already got a batch of killer tunes written and recorded and available as a 7″ record. This band pulls influences from a variety of styles and delivers a molotov cocktail of explosive power designed for maximum destruction. If you take the raw early New York sound, add some metal, crust and street punk touches and you are getting there. Some of the songs remind me of bands like Behind Enemy Lines or Aus-Rotten, but with the streetwise flavour that you might expect from a band grown in the Big Apple. It’s probably worth mentioning that this band is made up of scene veterans who have done (or are still doing) time in bands like The Casualties, Deathcycle, Disnihil and Sheer Terror, and whilst that kinda sets expectations really high, I’m glad to say that this record totally delivers. If the idea of a crust meets NYC meltdown appeals, then grab yourself some Sonic Poison. Tom Chapman