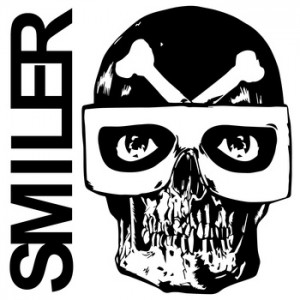 Smiler – Death Knell EP Download
What sadly appears to be a 6 song parting shot from the Bridgend/Cardiff 4 piece, but it’s a positive note on which to wrap up (if indeed they do call it a day – more comebacks than Jesus Christ this lot). Opening track/Intro ‘Pyschomania’ plays up to guitarist Ioan Thomas’ love of horror and stoner/sludge before the band launch into a ferocious ‘You Don’t Have To Listen’ and it’s clear the bands’ Old School Boston HC/Drop Dead influences are very much alive and kicking, with vocalist Mike Davies almost doing himself an injury, such is the anger in his delivery. On ‘Too Blind To See It’ and ‘Vote Your Friends In’ the band throw a little bit of a curveball and deliver a more UK sounding style of mid paced punk rock (with dare I say it, a bit of Glunk swagger to ‘VYFI’ before it wanders back into stoner rock territory). With bass player Gav Gates stepping down to concentrate on fatherhood and marathon running ‘Death Knell’ is as we say in Wales, a Tidy way to call it a day. (To be continued…probably). Ian Pickens