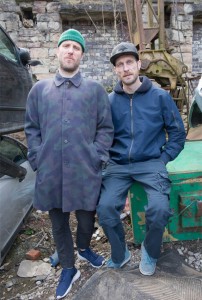 “Silly Me is about the long tunnel, the one that has no light. Another week spent walking up and down the street. The quiet tension of your living room with its shit sofa. The unconfirmed nature of ‘doing’ instead of ‘trying’.

It’s that realisation that all you have to work with is your own failure, it’s the only starting point you have and to ignore it, to dismiss the reasons why unhappiness is still haunting you is a mistake. It’s your ticket out of misery if you keep trying to confront it because eventually persistence rules. Not all the time though.

This isn’t one of those fucking smug acid jazz positivity yawns. Large numbers of people have fuck all and that won’t change. That’s horrible. ‘Silly Me’ is just one experience over Andrew’s solid, hard funk loop.“- Jason Williamson.

Simon Parfrement’s new video takes in moments from Sleaford Mods’ sold out ‘Key Markets’ tour that was priced fairly for the people. Pick up ‘Silly Me’ on the new album ‘Key Markets’ http://geni.us/SleafordModsKeyiTunes, or order the vinyl here: http://cargorecordsdirect.co.uk/products/sleaford-mods-key-markets.