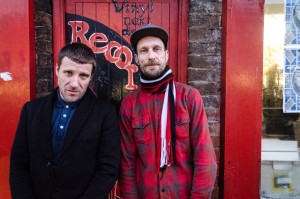 If you were sweating like an arrested FIFA member at the front of the last run of Sleaford Mods live shows, you will know where this duo are at right now. With packed venues admiring their hard graft around the country on this current tour, and a sold out Koko to play this week, the band have announced new live shows today that will run through September and October, their biggest UK tour to date.

“This is our first ‘posh’ tour; big bus, everything,” states frontman Jason Williamson. “It’s a big deal. Sleaford Mods at Rock City, The Forum, Manchester Ritz etc. Who would of thought it? Not fucking me.”

By that time, their new album ‘Key Markets’ would have been released on abstract-punk label Harbinger Sound (July 10th), they would have played with The Who and at Glastonbury, End of the Road and Isle of Wight Festivals – and maybe even bought their own kettle.

The band celebrate this news today by giving away a free track ‘Face To Faces’, taken from their 3rd proper album, available now for free when you pre-order ‘Key Markets’ online:

“’Face To Faces’ has been viewed lyrically as slightly redundant by some due to the referencing of politicians no longer with governmental powers, as a result of the last election,” explains Williamson. “The song bemoans the ‘mask’ used by the sentinels of control; no party differs because all serve to uphold the interests of their heirs of our damned civilisation. We are being worn down, stripped and we are ripe for extinction at the hands of the wealthy few. Whether it be Johnson, Clegg, Major, Brown, Blair, Ed Fucking Balls, it doesn’t matter. They are all as one. The only unity in this life is with the rich.”

The album will be housed in a gatefold sleeve designed by Steve Lippert and was mastered by Matt Colton at Alchemy. Everything else was done by Sleaford Mods. Pre-order the album on iTunes and get ‘No One’s Bothered’ and ‘Face To Faces’ instantly. , or if you want vinyl mate, then do this.

Support comes from Steve Ignorant’s Slice Of Life on all dates (apart from Brighton, Cambridge and Nottingham). Mark Wynn is second support on all dates.