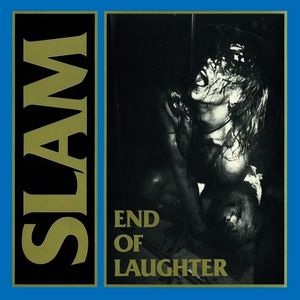 I reckon if no band were to record another note ever again, there is enough obscure/ out of print material out there that we would actually have new music to listen to for years and years to come. Case in point – Drunk With Power records have unearthed two albums from Swedish skaterock band Slam originally released in 1984 and 1986, and whacked them together onto one disc for some modern day delectation. I’ll hold my hand up and say I’ve never heard of these dudes, but they did have a certain degree of international exposure in their time, with appearances on the Thrasher Skate Rock Vol 3 and Chaos In Europe compilations in 1985. They also toured the USA in 1986, playing alongside bands like Circle Jerks, SNFU, Gang Green, Instigators and plenty more legendary bands. The disc starts off with their 1986 album End Of Laughter and it’s by and large a melodic mid-paced affair with lots of guitar action. Musically think somewhere along the lines of Instigators or Jingo De Lunch, rocky rather than hardcore in style. Back in 1984, Slam were quite a different beast, with a rawer European hardcore sound, all sung in Swedish. I can’t say that this is the release I have been waiting all my life to hear, but it is pretty cool to get to listen to obscure gems like this every now and again. Tom Chapman