Warning: preg_match() expects parameter 2 to be string, object given in /var/www/vip4/sites/vip6102689/httpd/htdocs/wp-includes/formatting.php on line 4866
 SKY – Toccata: An Anthology - Mass Movement
x
Spread the love 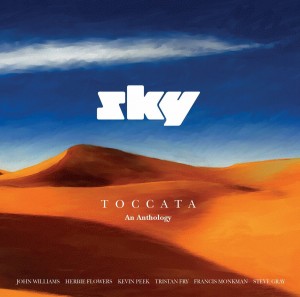 Any music fan or rocker who was around in the 80s will know the name of SKY. This double disc CD compiles highlights throughout the bands career spanning each release along with some ‘single’ tracks. Thirty-one titles of prog-enhanced classic rock… could it be loosely classed as AOR or does it simply combine elements of all styles? For some, the instrumental content of ‘Toccata’ may prove too extensive, but creating the correct listening environment and frame of mind goes a long way to searching out the skills and complexities the band encompassed. Ahead of the times technically SKY have yet to receive the nod of approval from the younger generation of nostalgia seekers but with exposure to this grandiose anthology the true credentials of the band are to be discovered. Touching on certain areas of Jazz, the effervescent tones of tempo along with the gentle keyboard presence leave oneself in a mixed state of mind between laid back and energised. However repeated plays in different states of intellect is probably the undecided factor that keeps ‘Toccata’ inspiring – gentle grooves, elaborate guitar work, and plenty of intricacy. The limited three disc (2CD / DVD) Digi-pack comes accompanied with the entire 1980 performance on the German TV show ‘Musikladen’ which happens to include five previously unreleased and un-broadcast tracks from the concert, so a nice abundance of reverberation for fanatics of this genre. Mark Freebase