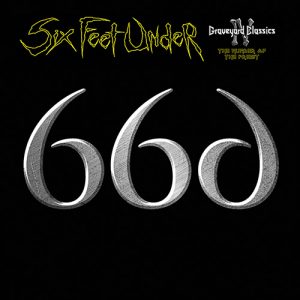 I have been a fan of Six Feet Under since I first heard Warpath upon its initial release so long ago. While I don’t own every single one of their albums I do love all of the ones I have in my collection. Strangely enough, I usually don’t like their Graveyard Classics albums. I tend to listen to them once or twice and then go back to Bringer of Blood or 13. With a little reluctance I entered into Graveyard Classics IV: The Number of the Priest and was surprised to realize that, for once, I actually loved a SFU cover album! Maybe it’s the concept of playing only Judas Priest and Iron Maiden songs. Maybe it’s just that they picked songs that, to me, were more suited to their style. Maybe this album just fucking rocks. Yeah, I’d have to say it’s all three and it’s a winning formula! I think “The Evil That Men Do” may be my personal favorite on this album but there are no losers here; all eleven tracks are pure heavy metal gold. Jim Dodge