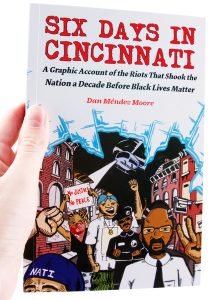 Not sure if a graphic novel is the best way of documenting the six day unrest/civil disobedience that impacted Cincinnati in 2001 following the death of unarmed black teenager Timothy Thomas at the hands of the police; but I guess in an age where reading is fast becoming a lost art for many young people, then it’s as good a medium as any.

The book is based on first-hand accounts of people who were involved in the protests, from local teens and clergy to Black Panther activists and Looters, although unsurprisingly the views of the City Council and Police are not included.

Kudos to Moore for documenting this episode in the on-going civil rights battle, but it’s truly depressing that this took place ten years after the Rodney King incident engulfed LA in rioting and ten years before Ferguson.  Ian Pickens