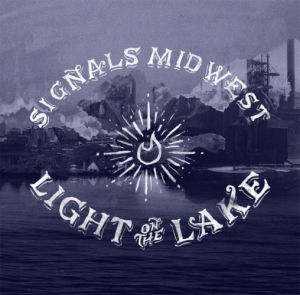 Signals Midwest – Light On The Lake CD (Tiny Engines)
This CD came in my review package without any accompanying press sheet (or I lost it), but sometimes I love putting these discs in for a blind listen. Seeing as this record is already more than a year old it looks like I’m a bit late to the party, but within minutes of the first song blasting out, it’s clear that everything is still in full swing. Musically this could have been released at any point over the past 15 years and still managed to sound fresh. Think of bands such as Jawbreaker, who took the American hardcore sound and messed with it, bringing in rock, indie and americana influences. Then think of the generations of bands that were in turn influenced by the Jawbreakers of this world, bands like Hot Water Music, Small Brown Bike, Braid etc and all added their own twists to create new sounds. Signals Midwest fit well into that bracket, as they take what could be classic poppy punk melodies, but then bang in undistorted guitars, angular time signatures and jarring rhythms to make the sound their own. There is some great guitar work on here, songs such as “San Anselmo” or “Caricature” have some incredible intertwined melodies that drop in and out, adding character to these songs. So yeah, the festivities here are still in full flow and I’m glad I managed to join the party. Tom Chapman