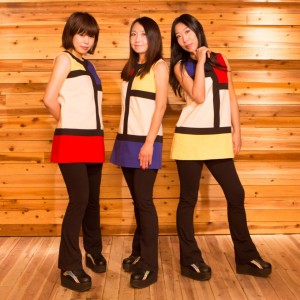 Shonen Knife, the All-Female Pop-Punk-Rock Pioneers from Osaka, Japan celebrate their 35th Anniversary and (as yet untitled) new album with their most extensive UK & Eire tour to date, presented by Damnably – including a slot at the Stewart Lee curated ATP Festival.  Original drummer Atsuko returns to the band to play bass on the new album recording sessions, which have now begun in Osaka. The band released a statement today:
Announcement from Shonen Knife

News!! Atsuko’s comeback and the recording has started!!

It was decided that the original member Atsuko’s comeback and the recording has started in the hometown Osaka.
The new album will be released in late March 2016.
The members of Shonen Knife after this new album are Naoko (Vo, G), Atsuko (Bass, Vo) and Risa (Drums, Vo).

UK/Ireland Tour from April is decided, 2016 will be very active year for the band.

For Ritsuko (B, G, Vo), she is still in her childcare leave but if she can arrange her time, she will join the band when the band will play a show like “For Leaves Clover tour” which is a special tour as 4 members of Shonen Knife, shows which Atsuko can’t attend and recordings.

For Naru (B, Vo), she was a support bassist for the band but she did very good job and we decided that we invited her to Shonen Knife Family as an official member.

Naoko, Risa and Naru will play at the event produced by Guitar Wolf on December 27th in Osaka.

We appreciate your continuous support for Shonen Knife.

From all members of Shonen Knife and Atsushi of TOMATO HEAD