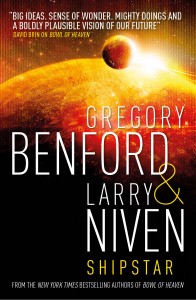 When the crew of the SunSeeker investigates a gigantic, bowl-shaped object with a sun at its center, their landing party is split into two groups. One is captured, while the other is pursued across a deadly landscape. Both seek to unravel the mysteries of the gargantuan artefact known as the Shipstar. To survive they must escape the alien inhabitants known as the Folk. What they discover along the way will transform the way mankind understand its place in the universe.