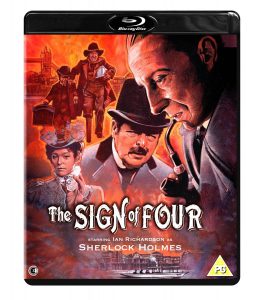 One year before Granada began filming Jeremy Brett in what to my mind will always be the definitive Sherlock Holmes television adaptions, Sy Weintraub – famed, among other things, for bringing Ron Ely’s Tarzan to the screen – began his own productions, totally unaware Granada were waiting in the wings. His intentions were to make more than those he did – The Sign Of Four and The Hound Of The Baskervilles – but a rights battle ended in out-of-court settlement and Weintraub exiting stage left. Trust me, as far as The Sign Of Four goes, this was a very good thing.

Ian Richardson clearly relishes his introductory stint as Holmes – he has a joyous moment towards its end that equals Brett’s obvious glee in playing the role – but is hampered throughout by a cliched and thoroughly predictable take on the Holmes mythos. Puffing on pipe, check. Deerstalker, check. A Watson almost as stupid as Nigel Bruce, check. And fog. Clearly – cough – with eyes on the US market, there is always fog. Fog in London. Fog in the country. There’s even fog in the fucking house. At last a scene arrives with no fog and you sigh with relief, until creeping in from behind a tree comes fog. You want to bang fog’s head against the wall, but you can’t, because it’s fog, and anyway, it wouldn’t be the done thing – this is England, you see. Coupled with an obviousness of delivery in some Columbo style pre-reveals that dispel all mystery or tension – and I’ll say nothing of the actual ‘sign of four’ because you just have to see it for yourself – this is elementary school screen Holmes, utterly daft and forgettable. 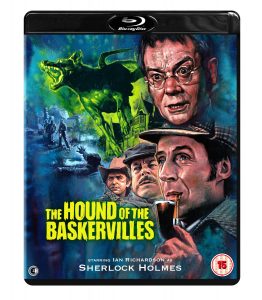 All the more surprising, then, that The Hound Of The Baskervilles is a delight – the second best version of the story I’ve seen – a colourful and convincing concoction with a great supporting cast – Martin Shaw, Brian Blessed, Connie Booth, among others – that gives Granada’s own adaption a run for its money. And staggeringly, considering its setting, has hardly any fog at all. A new and somewhat less bumbling Watson certainly helps, along with wonderful location cinematography, a stirring soundtrack and a clear creative conviction from all involved. Whoever slapped someone else about the head between the two productions deserves praise. The only thing that worried me throughout, is exactly where the market for it and its predecessor will lie. It’s higher definition, but that’s really about it. No making-ofs, no photo-galleries, nuffink, nada. Other than for the Holmes completists, difficult, to be honest, to picture people running out to buy. A shame, because Richardson really makes a bloody enjoyable Holmes. For the sake of that, give it a try. Mike Wild

*Both films are available separately.