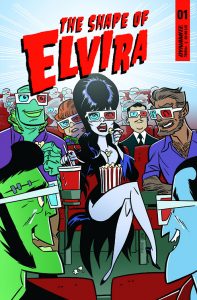 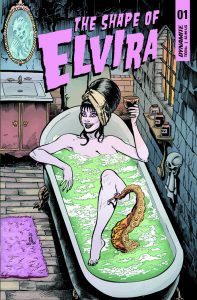 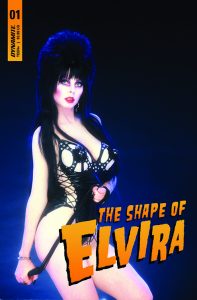 Dynamite Entertainment announced today that Elvira will return this winter for a new four-part miniseries by writer David Avallone (Elvira, Bettie Page) and artist Fran Strukan (Hack/Slash vs. Vampirella) that will have movie fans reeling!In Elvira: Shape of Elvira, the Mistress of the Dark lands the leading role in a touching art film about human/gill monster romance, but there’s something decidedly fishy about her costar. Is there an Oscar™ in her future, or is director Billy Bullworth interesting in spawning something more than an Academy Award-winning movie?“Given Elvira’s history as a “horror host”, homage is always on the table.  A certain Oscar-winning fish story seemed worthy of parody, and a natural setting for Elvira,” remarked writer David Avallone. “More personally, I’ve been in movie production for decades, and doing a series that takes place mostly on a movie set lets me mine those rich experiences for the story.” “The people have said, ‘We want more Elvira!’ And in return, we said, ‘You got it, screaming fans of the macabre! Also, please stop yelling.’ But they are just really excited, so I get it,” said Kevin Ketner, Editor at Dynamite Entertainment. “David has been doing an amazing job with Elvira and this is going to keep that going.”“David’s writing on Elvira is outstanding.  He truly understands the character and delivers a fantastic script,” said Nick Barrucci, CEO and Publisher of Dynamite Entertainment.  “This series is going to really resonate not only with Elvira fans but with moviegoers who’ve been looking for their new favorite comic. The Shape of Elvira will not disappoint!”​The first issue of Elvira: Shape of Elvira delivers a wide selection of cover variants, providing fans and retailers a chance to collect the whole set! The cover artwork features the talents of Francesco Francavilla (The Black Beetle), J. Bone (Batman/The Spirit),  Kyle Strahm (Elvira: Mistress of the Dark), Dave Acosta (Elvira) and a photo cover respectively. Elvira: Shape of Elvira  #1 is slated for release in January 2019. Comic book fans are encouraged to reserve copies of Elvira: Shape of Elvira with their local comic book retailers. Elvira: Shape of Elvira will also be available for individual customer purchase through digital platforms courtesy of Comixology, Kindle, iBooks, Google Play, Dynamite Digital, iVerse, Madefire, and Dark Horse Digital.