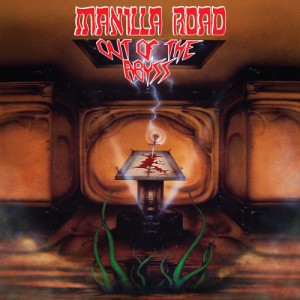 Shadow Kingdom Records’ reissue of Out of the Abyss, the seventh full-length release from Wichita, KS’ MANILLA ROAD is out today. Purchase the album at this location.

Originally released in 1988, Out of the Abyss is an under-appreciated gem, one that guitarist/founder Mark “The Shark” Shelton describes in the reissue’s liner notes as containing “some of the most brutal material that MR has ever done. Shelton goes on to say that “it was the last album in an epic quest by Randy, Scott and I to be as fast and furious as possible with some of the songs…and most of the topics were quite dark and based on Cthulhun mythos or other horror and mystery directions.”

Shadow Kingdom Records’ Tim McGrogan had this to say about Out of the Abyss:
“Most fans think the golden era is Crystal Logic through Mystification, but we encourage fans to spend more time with this album. The first thing that’s interesting about this album is that it originally contained one of MANILLA ROAD greatest Epic songs ever, “The Book of Skelos.” The song was dropped off of the album for some unknown reason (that would be a good interview question for Mark Shelton), and later appeared on a different pressing of The Courts of Chaos and we’re not entirely sure that song even made it to the first pressing of that album either. Strangely enough if you’re familiar with that song and can imagine that song being a part of this album, Out of the Abyss would arguably be one of the best MANILLA ROAD albums and would have expanded and been part of what’s now considered their classic era. The album is dark, evil, thrash-y heavy metal with some killer KING DIAMOND-esque vocal screams. Without a doubt Out of the Abyss has some of the fastest, most intense Thrash Metal not only on any MANILLA ROAD album, but of any 80’s Thrash Metal album.”

Out of the Abyss will appeal to fans SLAYER, METALLICA, IRON MAIDEN, and MERCYFUL FATE.