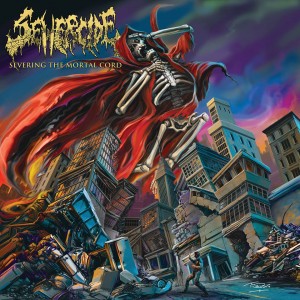 Sewercide – Severing The Mortal Cord (Infernal Devastation)
When done seriously death and thrash metal can be merged in a way they enhance each others brutal features. Sewercide is one of these bands. The speed and crunch of thrash give more power to the heaviness of death metal, in a post­-apocalyptic way. Early Death and Malevolent Creation gets hit in the head with ‘Reign In Blood’ era riffs, and a bit of Venom / Toxic Holocaust to give it that true undead feeling, while the vocals are just insane. Yeah, these Australians are on to something with these five songs they have served up for you to consume. Martijn Welzen