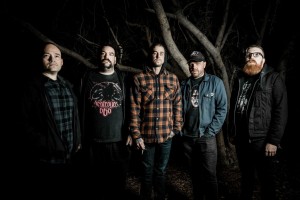 Having signed with Relapse Records late this Summer, SEVEN SISTERS OF SLEEP will release their debut for the label in February, in the form of Ezekiel’s Hags. Well in advance of the LP’s public availability, the album’s lead single, “War Master,” has been issued this week through Cvlt Nation.
Southern California’s SEVEN SISTERS OF SLEEP is an act not content with fitting into one genre or subgenre. Through titles released by A389, Southern Lord and more since their inception less seven years ago, and several notable stateside tours with the likes of Full Of Hell, Ilsa and others, SSOShas hammered their way into the minds of many extreme music thrill-seekers utilizing tactics traced to doom, death metal, black metal, d-beat hardcore, grind and more.
In September it was announced that SEVEN SISTERS OF SLEEP hat signed to renowned independent label Relapse Records for their upcoming third full-length album, Ezekiel’s Hags, which is far and away the band’s most ambitious and meticulously-crafted material to date. Delivering a venomous mixture of violent, doom-ridden madness with a severe beckoning to the occult, the quintet has forged a monolithic album that transcends solitary genre classification without rewriting the rules. Recorded with engineer Paul Miner (Motörhead, Terror, Phobia), Ezekiel’s Hags bears fifty minutes of new material through eleven relentless songs that beat the listener into oblivion. Chock full of tortured vocals, gigantic riffs, and thunderous drums, this is music as vile as it can be.
Cvlt Nation is now streaming the track “War Master” to fuel the masses with an early foretaste of the crushing force of Ezekiel’s Hags, noting of the track, “This band has consistently put out the kind of brutal audio torment that we love here at CVLT Nation, and as you’ll hear from our early premiere of the track “War Master” off the upcoming album, their sonic offerings have only gotten more depraved!”
Stream SEVEN SISTERS OF SLEEP’s “War Master” at Cvlt Nation RIGHT HERE.
Ezekiel’s Hags will see release through Relapse on February 5th, 2016. Preorders have gone live, the digital HERE and the physical with CD and both black and limited yellow wax merch bundles HERE.
Ezekiel’s Hags Track Listing:
1. Jones
2. Denounce
3. Gutter
4. Plateau
5. Brother’s River
6. Prey
7. Third Season
8. Sacred Prostitute
9. Ud-Nun
10. War Master
11. Bastard Son
SEVEN SISTERS OF SLEEP was formed in mid-2009 by members of Tafkata and The Arm and Sword Of A Bastard God, its members having been playing in bands and live together for fifteen years. Their first self-titled full length LP was released in 2011 on A389 Records and on CD through Southern Lord Recordings, and the band has been refining its sound ever since, as heard on their A389-released 2013 sophomore LP, Opium Morals, the split LP with Children Of God, a self-titled 7″ EP/CD, and their split 7″ EP with Ilsa. A European 10″ EP split with Shaman’s Owl was released on Feast Of Tentacles, and a very limited interlocking groove 7″ EP via longtime friends Vedavu Records rounds out the band’s current discography.
SEVEN SISTERS OF SLEEP:
Tim McAlary – vocals
Brock Elmore – guitar
Eddie Bermudez – guitar
Chip Blake – bass
Brian Thomas – drums