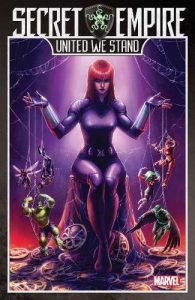 I can count on the fingers of one hand the number of times that the four colour universe has broken my heart. And three of them involved Captain America. The first was when he “died”, the second when he was stripped of the super-soldier serum and the third and worst of all, was when he uttered those two little words that changed everything I thought that I ever knew about Steve Rogers. As soon as he whispered “Hail Hydra”, my belief in the character, instilled by thirty six years of pouring over and compulsively consuming the stories of his adventures, was shaken to it’s very foundations and just when I thought things couldn’t get any worse for Steve, or that we were being fed a plot device that would later turn out to involve the eventual destruction of Hydra at Cap’s hand through infiltration, he became their Supreme Leader and conquered America. It was a bitter pill to swallow, but one that, as unexpected as it was, especially for a die-hard Cap fan like me, eventually morphed into one of the most interesting, intelligent and engaging Steve Rogers stories of the twenty first century. While Cap sat on his Hydra shaped throne, the rest of the world trembled and United We Stand collects the stories of the heroes who stood up to him and fought back, and how their journeys to the final battle were fraught with danger and weren’t as straight forward as Secret Empire might have made them seem.

With any story involving multiple characters there isn’t as much room to develop each of their individual tales in any detail, so the one shots and issues that featured those sub-plots are gathered together here. United We Stand is the tale of what happened to the members of the resistance who ventured to the Savage Land to locate one of the shards of the Cosmic Cube and prevent it falling into the hands of Hydra, of what happened when the Guardians asked the rest of the Galaxy to help Earth and how Black Widow’s young band of superhero spy’s infiltrated Hydra. And it also explores the the complicated relationship and fragile truce that existed between Steve Rogers America and the mutant homeland New Tian and tells the story of how the Uncanny Avengers battled the encroaching forces of darkness that plagued New York and helped keep the Big Apple relatively safe while it was held in its dimensional prison.

As usual with a compendium of collected one shots and linked tales, some fare better than others and some are more appealing than others. But it’s all a matter of individual taste, right? You know, like when you say potato and I say, um, something completely different.  That said, the quality is pretty consistent throughout, and while the intrigue of the mutants and Hydra trying to figure out a way to coexist without either playing their hand too early, the expedition to the Savage Land and Quill and company begging alien civilisations for help are the definite highlights of United We Stand, it’s still a book that you’ll need to read, if like me, you need to know the minutia surrounding, and every detail of, Secret Empire. Steve Rogers Empire, like so many before it, rose and inevitably fell and United We Stand is the story of the men and women who brought Hydra to their knees…. Tim Cundle