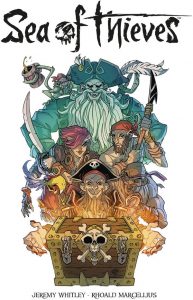 Much like The Secret Of Monkey Island did as a teenager for me and like Johnny Depp did for kids of the noughties, Sea Of Thieves has taken the romanticized view of pirates and repackaged it as one of 2018’s must have game for the kids. Images of a handsome, sun kissed scoundrels with a girl in every port, are in fact, severely at odds with the reality of pirates and pirating who were very much the terrorists of the time. Disease infested mongrels, they would rape, pillage and murder and not think twice about it, so with that happy image in mind I can now turn my attention to the now customary comic tie in.

The game itself is a co-op multiplayer where you and your pals can embark on any pirate adventure of your choosing in an open world setting whilst trying to avoid all manner of danger including Megalodon’s and the Kraken. You can also drink copious amounts of alcohol and puke on your friends after. (And this is a kid’s game?)Although there are people to interact with, there are no main characters as such, so writer Jeremy Whitley pretty much had a blank canvas to start with, although the locations will be familiar to fans of the game. The story itself is nothing ground breaking.  A night at the fabled The Unfired Pistol Tavern (so called because of the cursed unfired pistol that hangs above the bar, rendering all other pistols in its vicinity-useless) sets the scene for an epic battle between two pirate crews to reach the unclaimed treasure of a legendary pirate and with only one map in existence, they must try and outdo each other at every turn and conquer The Sea Of Thieves.

Fans of the game will enjoy it, as the story plays out like, well, the game. Whitley, who has a history of writing strong female characters into his stories, such as the award winning Princeless ,has managed that feat once again, while the artwork by Rhoald Marcellius has a clear Manga influence, whilst not losing sight of the “look” of the game. A roaring success, buy this book immediately or maybe even pillage it ya scurvy dogs… Chris Andrews