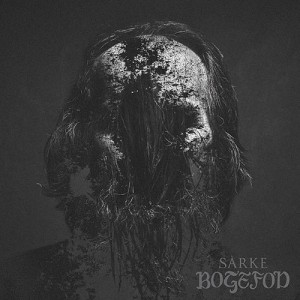 Those familiar with Norse mythology, will instantly recognize the name Torolv Bogefod, the evil walking dead protagonist from the Eyrbyggja saga. This 1000 year old zombie-Norse killer is the theme for which Sarke has based their new album. Sarke is the brainchild of Thomas “Sarke” Bergli from Khold and Darkthrone’s Nocturno Culto and it also features the guitar skills of Satyricon’s Steinar Gundersen.

Sarke manage to capture grim atmosphere of the subject matter on this album, with Noctuno’s chilling screams, layered over heavy slabs of black metal, laden with doom and punk elements. The album thunders in nicely with opening track “Taken” a satisfying head nodder, which then makes way for the more upbeat (in tempo only) “Blood of Men”. Third track “Barrow of Torolov” is the album’s first foray into doom, complete with acoustic intro. “The Wicked Transient Sleep” is the perfect example of the bands diversity bouncing between the savage riffery of Venom one minute, straight into the mid-tempo grooves that Celtic Frost does so well, the next. The heaviness then continues with “Burn”, then we reach track seven – “Dawning”, an acoustic track with beautiful operatic vocals, which is a nice break from the relentless heaviness and manages to tap into the folky nature of the story.

This is an album that tells a story and therefore to fully appreciate it, it needs to be played in its entirety. BOGEFOD’s lyrics and indeed the band themselves will be taking part in movie called SAGA, which will no doubt further expand the story told on this album  It’s not a straight forward black metal album, Sarke have stayed true to the dynamic sound they forged with earlier albums, but fans of the genre should love this, as it features some of the main players at their best, whilst other metal fans should check it out, as there really is something for everyone and it’s about Vikings and Vikings are cool right?   Chris Andrews