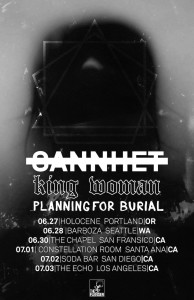 San Francisco’s Flenser Records has had a busy start to 2015 and is excited to announce its first-ever West Coast label tour featuring Sannhet (Brooklyn), King Woman (Bay Area), and Planning For Burial (New Jersey). A week of shows are confirmed for the three bands in Portland, Seattle, San Francisco, Orange County, San Diego and Los Angeles, respectively, and will mark the first batch of shows for Sannhet who are on tour in support of their newly released LP Revisionist. The critically-acclaimed album has received rave reviews from Pitchfork, The New York Times, and Stereogum who said the band makes music that “largely defies categorization… epic, cinematic stuff… complex instrumentation is employed in the service of soaring, breathtaking music.” Additionally, Sannhet just completed an East Coast / Midwest run supporting Liturgy and have several shows in June before the Flenser tour including appearances at Northside Festival in Brooklyn and NXNE in Toronto. Check out Sannhet’s full tour routing below.

Bay Area’s King Woman are also heading out on this Flenser tour in support of their newly unveiled, highly-praised debut Doubt EP. Released this past March, Doubt touches on some heavy topics and allows vocalist/lyricist Kristina Esfandiari’s ingenuity to really shine; with nods to issues like religious abuse, sex, metaphysics, heartbreak and more. The band wears their musical influence on their sleeve: “We love bands like Black Sabbath, OM, Neurosis and Jesu”, said Kristina, and with her lush and dramatic vocals not unlike Mazzy Star and even Beth Gibbons, King Woman has created a sound all their own. Rolling Stone called Doubt “…part gauzy Mazzy Star-esque fever dream, part lumbering Sabbathian nightmare” and Pitchfork described it “…as dreamlike as it is suffocating.” This tour will be King Woman’s second of 2015 with additional shows scattered throughout Spring and Summer.

Joining Sannhet and King Woman on the Flenser Tour is New Jersey gloom band Planning For Burial, whose brand of dark shoegaze/gloomgaze is hard to categorize but contains elements of slowcore, shoegaze, doom, drone, 90’s alt rock, 80’s goth, and black metal, while never being defined by any one of those genres. Planning For Burial released its second full-length, Desideratum, in 2014 on the Flenser, but its back catalogue boasts a myriad of EP releases on labels like Enemies List, Music Ruins Lives and more. Additionally, The Flenser will be re-issuing Planning For Burial’s debut full-length Leaving (2010) in June of this year.

See these three fantastic bands on tour together this June and July and stay tuned to TheFlenser.com for more news as it happens.