Warning: preg_match() expects parameter 2 to be string, object given in /var/www/vip4/sites/vip6102689/httpd/htdocs/wp-includes/formatting.php on line 4866
 Rye Coalition – The Story of the Hard Luck 5 - Mass Movement
x
Spread the love 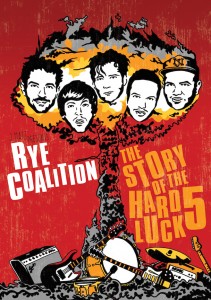 Rye Coalition – The Story of the Hard Luck 5 DVD (MVD Visual)
I’d not heard of this New Jersey five piece before this documentary, which is surprising given that they count Steve Albini and Dave Grohl amongst their producers and have toured with both Foo Fighters and Queens of the Stone Age. The DVD tells the story of the band’s origins as a Shellac/Jesus Lizard style noise band, playing basements on the East Coast of America and their development over 13 years to become a classic rock tinged act, touted as one of the ‘next big things’ in the wake of Nirvana and the Grunge movement, signing with Dream Works and recording their major label debut in Sun City Studio with Grohl.

It becomes apparent early on that despite these breaks, Rye Coalition (or simply Rye as they were known in their earliest incarnation) have managed to get clobbered by every bit of bad luck imaginable to a touring band, culminating in DreamWorks disintegration before their major debut (appropriately, and with more than a certain irony, called ‘Curses’) was released.

Despite their slightly obnoxious attitude it’s hard not to feel sorry for the band, who obviously possessed both the talent and the work ethic to become at least a self-sustaining band, and who despite the frustrations of their career are still playing live today. Endearing and cautionary – ‘The Story of the Hard Luck 5’ is an enjoyable look into the mechanics of the music industry and how success is a fickle mistress that can evade even the most deserving. Ian Pickens