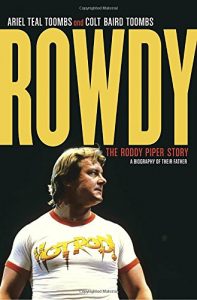 In 2015, we sadly lost WWE Hall of Famer and all round wrestling legend, “Rowdy” Roddy Piper, who at the time was in the midst of researching his life, and his past, to compile this book. Multiple concussions and wrestling folk-lore had somewhat skewed the legendary stories that Roddy took as gospel. In researching this book, he actually found that most of those wild stories are true. Painting a donkey to look like a zebra, wheeling it out to an arena and interviewing it as if it were Chavo Guerrero’s mother-True. Getting a Mexican crowd on their feet, hand on heart to play the Mexican National Anthem on his bagpipes, before belting out La Cucaracha – True.

Sadly he never got to finish his book, but his son Colt Baird Toombs and sister Ariel Teal Toombs lovingly took the reins. Tracking down multiple personalities from the world of wrestling and beyond, we get to hear about the tough upbringing  Roddy endured, being dragged up and down Canada as a child, the homeless teen who took to fighting to put food in his belly, and ultimately his rise to fame as one of wrestling’s most notorious and recognizable characters. Not only was Roddy a great performer, he was a master of ring psychology who had the ability to hold a crowd in the palm of his hand. Such was Roddy’s mischievous streak, controversy was never far away. Whether hitting Fijian wrestler Jimmy “Superfly” Snuka over the head with a coconut, or painting himself half black to face Bad News Brown at Wrestlemania VI, Roddy knew how to get into the mind of an opponent, could work a crowd like no-one else and nothing was off limits to, or for, him. It was this talent that turned heads in Hollywood and eventually led to his moderately successful TV and film career.

While Colt and Ariel have generally done an excellent job in compiling Roddy’s life story you don’t have to be a wrestling fan to appreciate Rowdy as many common wrestling terms are explained.  The narrative is sometimes a little confusing as the stories are told from several different points of view, which can make it a difficult read at times, but this shouldn’t put anyone off reading this book as it’s a fascinating insight into the life and times of Roddy Piper. A man equally as important to the success of the modern day WWE as Hulk Hogan and a man the likes of which we will never see again…Chris Andrews