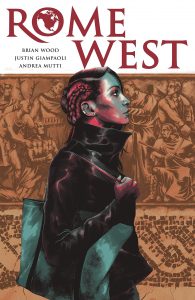 Imagine if, instead of being “discovered” by the Vikings, America had been colonised by a legion of Roman soldiers, far from home after being battered by storms and an unforgiving ocean, five hundred years earlier.  What would have happened if the first recorded contact with the tribes that called the East Coast of the United States home had been made by soldiers in the service of Rome and not Christopher Colombus?  And how would history have been irrevocably changed if the lost and forlorn Romans had settled in America and then lived alongside the tribes and the cultures, social attitudes, beliefs, knowledge and, albeit relatively primitive, technologies and weapons of both the Romans and Native Americans had become intertwined? These scenario’s form the basis of Rome West, a tale of alternative history that traces how human society would have differed and evolved over the last two millennia if America had become a Roman colony in the final days of the Empire.

Clever, intriguing and widely imaginative without venturing too far outside of the boundaries of established history, Wood and Giampaoli’s take unfolds around, and the through, the lives of the descendants of one of the founding families of the original Roman settlers. From the disappointment of Columbus when he realises that his voyage has been for nought, through to the “Great War” between Westerners and the Aztec Empire and the unfolding Cold War and Civil Rights struggles of the late twentieth century, Rome West threads it way through the annals of mankind’s development and offers a different yet  strangely familiar, and thoroughly absorbing, snapshot of how things might have been if Latin rather than English had become the global language of “civilisation” and commerce instead of English. Accompanied by the astonishing, incredibly life like art of Andrea Mutti, Wood and Giampaoli’s brief sojourn through an imaginary world forged by Rome acknowledges the inherent fallibility of humanity and postulates the idea that no matter who was, and is, in charge, the eventual outcome would almost certainly, in most cases, be the same. Because at the end of the day, and as sure as the sun rises in the East and sets in the West, humans will always be human and the seven deadly sins will always be the same no matter how history develops or which world it unfolds in.  My only complaint is that Rome West doesn’t go into enough detail, offering a variety of wonderfully enticing titbits instead of the full seven course meal that it rightfully deserves to be. Who knows? Maybe Wood and Gianpaoli will expand Rome West’s mythology and transform it into a novel, or better yet a series of novels. I can but hope. Long live Rome… Tim Cundle