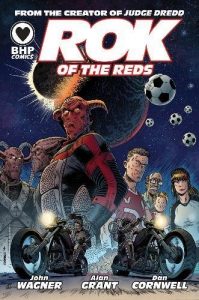 When you reach a certain age, for some inexplicable reason, nostalgia starts burying its claws deeper and deeper in your psyche. Maybe it’s because you’re closer to the grave than you are your youth and having realised that being grown up isn’t half as much fun as you thought it would be, begin to long for the things that you made you happy when you were a teenager and during your childhood.  Me, I’ve always loved comics and Rok of the Reds, the latest foray into the four colour world by veteran writers John Wagner and Alan Grant, catapulted me straight back to the eighties and immediately made me think the book that arguably had more of an impact on me than any other, 2000AD. Which probably isn’t all that surprising is that where, and when, Grant and Wagner cut their teeth and forged their identities as comic authors par excellence. Rok of the Reds is rammed full of Wagner and Grant’s trademark sense of subversive and anarchic fun and healthy disrespect for authority and power  and tonally has far more in common with Strontium Dog and Robo-Hunter, than the plethora of superhero adventures that have become the norm for twenty first comic fandom.

The tale of an alien dissident fleeing his people who finds himself on Earth, forced to assume the identity of a former footballing prodigy now consigned to playing in the champions league, Rok is an ode to the halcyon days of insurrectionist storytelling that encouraged it’s readership to think for, and believe in, themselves, the value of individuality and the joy and pleasure that football, stripped of the burdens of corporate sponsorship and the ideas that profit and wealth are more important than the game, brings to its fans and players. While I’m no fan of the game myself and don’t even pretend to understand it, the passion that Wagner and Grant have for football is more than evident on, and in, every page of Rok, but don’t let that fool you into thinking that Rok is just a Doomlord meets Roy of the Rovers sports based yarn.  It’s far more than that. Extoling the virtues of self-discovery and while reinforcing the idea that the things we fall in love with have the power to change not only our own lives, but those of the people around us and maybe even the world itself, Rok is an intelligent, funny and acerbic story that rejects authoritarianism and whole heartedly supports self-determination and autonomy.  And don’t think for a minute that the dynamic duo are the sole creative force behind Rok as its Dan Cornwell’s eighties-tastic, Carlos Ezquerra influenced art that, along with Abby Bulmer’s colours, gives Rok it’s incredible, and strangely timeless sense of period and identity.  All together now, “Let’s go Rok, let’s go, Ohh, Ahh, Ohh, Ahh Red Army”… Tim Cundle