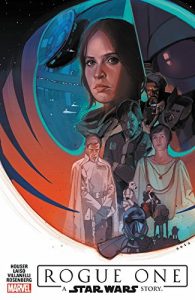 The opening sequence of Star Wars in which the ridiculously outgunned underdog, the Tantive IV desperately attempts to escape from a Star Destroyer was burned into my memory at beginning of 1978. The reason for its flight, and the plot vehicle for the film, was a stolen set of plans that could potentially help destroy the greatest weapon in the galaxy, the Death Star,  which would in turn strike a crippling blow against the merciless Empire.  It’s a story that has passed into the popular consciousness, with the vast majority of the Western world having a passing, at least, knowledge of Star Wars mythology and Rogue One is the tale of how those plans ended up in the hands of Princess Leia and the Rebel Alliance, and how Star Wars, as we know it, began.

Rogue One is essentially a story of sacrifice, how individuality is subsumed and abandoned in favour of faith and belief in a righteous cause, and how in order for the whole to flourish, some are forced to give up everything they have and are. I’m guessing that most of the people reading this are familiar with the plot, the rag-tag bunch of commando’s who embark on a suicide mission to raid one of the most heavily fortified Imperial bases in the Empire and against all odds, manage to achieve the impossible.  Basically, it’s a more involving, moving and personal take on The Dirty Dozen, albeit one that’s set in the universe that George Lucas created.

And Jody Houser, while filling in the odd blank here and there, pretty much sticks to script and tells the story as it appeared on screen, meaning that it zips along at light speed, getting from Point A to Point Z and a finale that still tugs at your heartstrings in a time that challenges the Falcons record breaking attempt at the Kessel Run. The characterisation and dialogue do exactly what the need to in order to tell the story and Laiso, Vianelli and Bazaldua’s gorgeous, action filled artwork brings the whole thing to life. While this adaptation is nearly indispensable for any Warhead, it’s the inclusion of the Swiercynski scripted and Blanco illustrated, energetic, fun and frantic story of how Cassian and K-2SO originally met and went on to become partners and friends that makes it absolutely essential for any, and every, tried, trusted and true Star Wars fan. The Force really is strong with this one… Tim Cundle