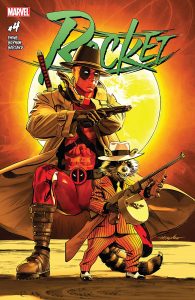 If Harry Harrison had, during his long and illustrious career, embraced a Chandler-esque predilection for noir fiction and had written a series of tomes dedicated to the genre that were set in space, then buried somewhere in those imaginary stories would be the formative blueprints for The Blue River Score.  Which believe it or not folks, isn’t a bad thing. In fact, it’s just the opposite. It’s a very good thing. See, Harry Harrison was responsible for creating one of the greatest characters in Science Fiction, “Slippery” Jim DiGriz more commonly known as the Stainless Steel Rat, and no matter how many of his adventures I consume, Rocket always reminds me of Jim. Thing is, if you asked me why the second most popular* member of the Guardians always makes me thing of the Stainless Steel Rat, I almost certainly couldn’t pinpoint any single attribute or quirk that the cybernetic raccoon has that makes me compare him to Jim. But I always do, and The Blue River Score, Al Ewing’s deliciously convoluted and darkly funny crime caper just reinforces my belief that Rocket is the anthropomorphized version of Mr DiGriz. And I meant what I said before, this belief of mine; it’s a very good thing.

The Blue River Score revolves around double crosses, betrayal, dubious partnerships, treachery, a total lack of honour among thieves, incarceration, impossible gaol breaks and sticking it right up the wazoo of a profit driven, greed fuelled corporation that puts money before people seven days a week and however many weeks are in a space year**.  And caught in the middle of all this hoo-hah while he’s on a break from guarding the galaxy, is Rocket, the most dangerous, three foot, gun-toting, and later heart-broken, procyonid in the known universe. Featuring a guest appearance from the most famous slightly deranged, psychotic costumed crusader*** in Marvelland who arrives just in time to give his buddy a homicidal hand, The Blue River Score rattles along at a, frankly, astonishing pace and doesn’t lift it’s finger off the thruster button for a single nano-second of its duration. There’s also a distinct mid-eighties 2000 AD (think DR & Quinch and Ace Trucking)  influence underpinning the whole thing  which is reinforced by the Brian Bolland flavoured, ultra-intricate and staggeringly fantastic art of Adam Gorham,  which just makes you grin from ear to ear from beginning to end. And, it’s surprisingly murder free****, which is in keeping with the whole Guardians ethos that Rocket is now an indispensable part of. Crime may not pay, but it sure is a whole lot of fun…  Tim Cundle

*Because Groot is the most popular member of the Guardians.  Look, I don’t make the rules, it is what it is and Groot is the number one guy / tree on the team.

**I know that it’s the time that it takes a planet to orbit a star that determines the length of its solar year, but different planets and different stars, different folks and different strokes. Every planet is different. So, you know, space year.

***It’s Deadpool. I’m not giving anything away and it’s not a spoiler. Why? Because he’s on the cover of the book, that’s why.