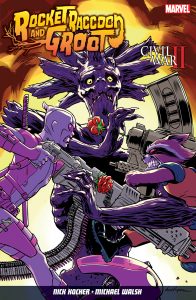 By now the whole world and its dog (hey, I don’t make the rules, dogs are still man’s best friend and more popular than cats) knows who Groot and Rocket are. They’re the walking, talking tree who can regenerate from a single twig and make one sentence mean anything and everything; and the psychotic, cybernetic procyonid with a penchant for weapons of mass destruction and an ever increasing number of the galaxy’s seedier vices who stole the show when the Guardians of the Galaxy movie took the worldwide box office by storm. They came, they saw, they inflicted copious amounts of violence upon their enemies, they got the best one-liners and they ended up with their likenesses plastered on every single bit of merchandise you can think of, and whatever you do think of, just remember that its been pre-empted by some marketing guy somewhere (because, that’s his job), and that somehwre, there’s already a production line ready to kick in to high gear and pump it out on an industrial scale. I know it sounds like I’m being a little cynical, but honestly, I’m not.  Rocket and Groot, especially the latter, were the undisputed stars of the show and as much as I, and hundreds of thousands of others, loved them on the big screen, they’re even better in the medium that created them. Yes, that’s right folks, if you like what you’ve seen of them on the big screen, then you’re going to love reading all about their whacky, unorthodox, crazy and, more often than not, homicidal adventures in the funny books and Civil War II is right up there with the best of the best of extra-terrestrial odd couple.

Okay, if you’re looking for a comic that attempts to reinvent the wheel or make sense of the increasingly insane environment that we live in or one that tries to answer life’s fundamental dilemma’s, then move along because Civil War II isn’t for you and neither are Rocket and Groot. If however, you’re looking for a riotously funny story that approaches traditional superhero tropes from out of left field and isn’t afraid to poke fun at its central characters or use them in any amusing way their authors and artists see fit, then you’ve come to the right place.  After attending an old friends multiple funerals and foiling a bid to have them commit high stakes burglary, Rocket and Groot become involved in the second civil war that threatens to tear the caped community apart. I say involved, but really they’re looking out for themselves (or rather the “brains of the operation” is looking after himself) and having attempted to play Captain Marvel for a “sucker” they’re dispatched, quite willingly, as far from the main conflict as possible and given the seemingly innocuous task of preventing an attempted robbery. Which sends them tumbling smack bang into Gwenpool and an intergalactic war criminal who are both after the same thing as our intrepid duo, something that incidentally, doesn’t want to go quietly and holds the key to saving the day for one the of the most powerful hero’s in existence.  And in usual wrong place at the wrong time but right chaps for the job Rocket and Groot style, they get somehow manage to handle the situation. Even though they don’t really know what it is or what they’re supposed to be doing. Nick Kocher’s characterisation and dialogue are searing (seriously the guy is on fire throughout Civil War II) and laugh out loud hilarious and wrapped in a finely tuned tale that zips along at a gallop, while Michael Walsh serves up a veritable feast of eye watering artwork that just makes the whole thing pop and crackle with more intensity than a roomful of teenage testers at an energy drink factory.  However, that’s not all folks, because included in the pages of Civil War II, as an added bonus of sorts, is Rocket’s original Marvel debut in Incredible Hulk #271 It’s a slightly strange story that while being historically interesting and fun in a very odd way, bears next to no resemblance to the character that we’ve all come to know, and grow more than a bit fond of.  While it’s a nice addition to the book and an amiable way of bringing it to a close, it just proves what I’ve always said. That the early eighties were really weird. But as bizarre as Rocket and that decade were, it doesn’t change, or alter, the fact that Civil War II is absolutely fantastic… Tim Cundle