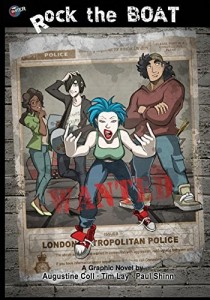 Rock The Boat – Augustine Coll, Tim Lay & Paul Shinn (Banter Publishing)
Back in the mists of time when I was growing up, one of my aunts made it her mission to ensure that I read what she referred to as ‘the classics’; and so from the time I was nine until I became a teenager, I was immersed in a sea of Verne, Wells, Conan-Doyle, Dickens, Fenimore Cooper, Dumas, Howard, Poe and others in an effort (and incredibly successful effort I might add) to generate a love of literature in my soul. It’s a love affair that, so far, has lasted a lifetime. It was during this time that I first encountered Jerome K. Jerome’s ‘Three Men In A Boat’, a Victorian travelogue of sorts that recounted a fateful journey up the Thames that the author undertook with his friends, and strangely, given my love of genre fiction, it was a book that I fell in love in. Like most period novels though, it remains of its time, and its appeal to a modern audience is questionable, as is (unfortunately) its relevance. At least that’s what I thought until I spent an afternoon consuming ‘Rock The Boat’ – a ‘loose’ (not too loose though, especially if you’re familiar with the “source” material) retelling of ‘Three Men…”, that’s been updated, reimagined and dragged headlong into the twenty first century.

‘Rock The Boat’ is the story of Jerome, and his band Jerome Jerome (see, what they did there?) and their plan to plug their latest single at the Reading Festival by cashing in a competition prize for a week’s boat hire (that Jerome was given as birthday present by his grandmother) and sailing (is it still sailing if the boat has an engine? Who knows? Answers on a postcard..) up the Thames to plug in, tune up and amplify, sailing through the middle of the outdoor extravaganza, thereby utilising the ‘dreadful’ hand that fate has dealt them to their advantage. As with all fool proof schemes concocted by obsessive teenage minds, the original plan goes disastrously wrong in a disastrously right way as the four “friends” undertake the adventure of a lifetime, running foul or the law, street gangs and the boating community in an attempt to take their music to the people which changes everything they’ve ever known. It’s fast, involving and funny, embodying the spirit of Jerome K. Jerome’s original while at the same time forges its own identity and story through its exemplary usage of its likeable (if a little stereotypical at times) characters, smart, witty dialogue and punchy, creative artwork. With enough references, subtle nods and sly winks to ‘Three Men..’ to keep the faithful happy and a feverish sense of individuality that will appeal to a new generation unfamiliar with Jerome’s book, ‘Rock The Boat’ has one foot in the past and both eyes on the future, proves that there’s a whole lot of life left in the classics if you look at them a little differently. Let’s rock… Tim Mass Movement