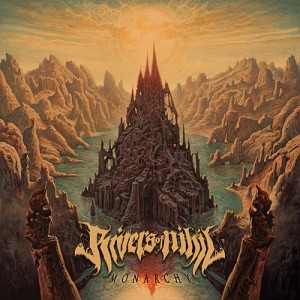 RIVERS OF NIHIL unveils “Monarchy”, their sophomore full-length album. The record will be available worldwide on Metal Blade Records on August 21, 2015. The first video from the album will be shot this weekend and is being directed by David Brodsky (GWAR, Whitechapel, Battlecross).

Today No Clean Singing is hosting an exclusive premiere of the title track “Monarchy”. Check out the stream of the song HERE.

Bassist Adam Biggs commented about the song and concept of the album: “The whole album is a concept piece, lyrically. It follows the struggles of a new breed of intelligent life on a planet earth that is now essentially a vast, oceanless desert. These beings, as humans did long before them, create a ruling class that dominates the masses through religious fear. By the time we reach the title track, this “Monarchy” is in full swing. Musically, the track expresses this dominant oppression via an exploration of our heavy, groove-oriented side. This one is a bruiser, but it doesn’t abandon our taste for blast beats, fierce riffs, lead work and an overall sense of shred.”

An additional new track, along with pre-order bundles, is available online now. Fans can visit metalblade.com/riversofnihil to hear “Perpetual Growth Machine” and reserve copies now. The band will hit the road in support of the new album this fall, dates are expected to be announced soon.

RIVERS OF NIHIL began their musical journey in 2009, and recorded their first EP, “Hierarchy”, with Carson Slovak. Six years and multiple tours later, the band returned to Slovak and Atrium Audio in Pennsylvania, after having recorded their previous effort “The Conscious Seed of Light” in 2013 with Erik Rutan at Mana Studios in Florida. Since the release of that album and signing with Metal Blade Records, RIVERS OF NIHIL found themselves quickly climbing the global metal ranks on the strength of overwhelmingly positive reviews and tours with Death (DTA Tours), Obituary, Whitechapel, Dying Fetus, Black Crown Initiate, plus an appearance at the storied New England Metal and Hardcore Festival.

During the album campaign, the band was joined by new drummer Alan Balamut and guitarist Jon Topore. Balamut and Topore join guitarist Brody Uttley, bassist Adam Biggs, and vocalist Jake Dieffenbach to form the up-and-coming force of modern death metal that is RIVERS OF NIHIL.

The seasonal concept that began with spring on “The Conscious Seed of Light” continues, of course, with “Monarchy”, as it welcomes the oppressive heat of summer. The story takes place millions of years after the events in “The Conscious Seed of Light”. Adam Biggs, who also serves as the band’s primary lyricist, explains: “The Earth has been transformed into a vast desert wasteland, where after aeons of lifelessness, new beings begin to take shape and begin their journey as shepherds of the planet. But after a while, a class system forms from a sun-worshiping religious dictatorship, and these beings start to lose their way. Only the guidance of an ancient earthly force can help them save themselves as well the planet.”

Fans will be able to join RIVERS OF NIHIL on the journey that is “Monarchy” upon its worldwide release on August 21, 2015.