Mass Movement’s very own Michael Parkinson of punk rock recently caught up with the musical maverick that is Rich Rags. In a passionate interview from the heart, here’s what the Role Models’ mainman had to say about his life in rock ‘n’ roll and beyond. Enjoy. He means it, maaaan!

MM: Alright, Rags? So, 2017… That was a little bit special for the Role Models, eh? You set out to release three albums in three years and succeeded with Dance Moves competing the trilogy. The critical acclaim that all three albums achieved must have blown you away. I mean, amongst others, the LP hit the Vive Le Rock Top 25.

RR: The critical acclaim did take me by surprise! I mean, you put everything ya have into the songs, the lyrics, and hope it resonates positively for people; speaks to ’em, ya know? You never know if it will. But man, that feels good when you wake up in the morning and there’s another person a thousand miles from ya writing about the songs; and from all these great underground zines and blogs from LA to Madrid, right up to bigger print publications like Vive Le Rock. And all that coming in a real way means a lot to me too. There is no buying up space in a mag or anything like that. All the press came from people who were moved to write about us, and that does feel good. Thanks for your support, man!

MM: For all the power pop on Dance Moves, my favourite track is probably Obituary Writer. Do you find the slower cuts harder to compose than an all out rock ‘n’ roll belter; do they need more thought and nurturing?

RR: Thank you! I wrote that the day Leonard Cohen passed. The lyrics come from a little disagreement between my wife and I. I asked her to print out some lyrics for me for the studio. When she got home it was obvious she read them… “Well, YOUR life is terrible then!” She then made a comment on how dark the lyrics were and what was the use. I brought up that she loved Iggy and Lou and David and was it okay for them to touch on this stuff. She later conceded it was probably a bit more difficult to take as it was someone she was close to and loved. I understand that. So, I tried to explain that singing about these things helps me deal with them. It really does. And hearing other singers open up and speak about struggles has helped me. Then I hit upon the idea that in a way, songwriters are like professional obituary writers, putting into concise words what might be difficult for us to say.

I don’t know if they need more thought, though.  Or get any more thought anyway [laughs]. Slow or fast, they get the same treatment.

MM: People commented that Dance Moves was deeper, possibly more mature (in a non-condescending way), and that you took people on a lyrical ride of ups and downs. Would you agree with that assessment?

RR: Well, the idea that I am still “maturing” during a trio of albums that started while I was in my forties does makes me laugh a little! But, I guess the “lyrical ride” that people talk of actually makes me quite proud. The lyrics of the album take us through a long binge weekend with someone who has a lot to forget. Or to remember, ya know? The highs and lows. The exhilaration and the stinging guilt. The remembrance of loved ones in the past and the realisation of friendships right in front of you. Wanting to be lost and still yearning to be found. Getting lost and being found. Right down to the song order, so when people pick up on the mood it makes me feel like we’ve achieved a bit of what was strived for.

MM: The albums were recorded with the aid of Pledge Music. The crowdfunding approach divides the punk community. What are your thoughts on this?

RR: From a personal point of view, Pledge has helped my band release the last two albums (the first was self-financed).m I am a person who needs to be home a lot. I am the main carer for my son who is on the autistic spectrum and I’m needed at home. I WANT to be there. I can’t do the “World Powerslave” tours anymore, but does that mean I should stop? Stop thinking bigger? I WILL bloody find a way to write and be creative, play as much as I can and make those connections. I am proud of what we have achieved and that platform helped us achieve it. Whether someone finds that a problem is irrelevant to me. That negative talk usually comes from someone who very shortly afterwards follows up with their own band’s “pre-sales,” so it’s hard to take seriously.

MM: The Role Models’ albums have been released physically via Glunk Records. How integral has this been, working with an underground label?

RR: Dom (Daley) and Glunk Records are very integral. He is a true believer in rock ‘n’ roll and reminds us to keep believin’ too! He has been such a big help and support to us and he does it from his heart.

MM: At the arse end of 2017, the Role Models supported Michael Monroe and his band around the UK. I have images of you wearing them out in the dressing room with your enthusiasm! [laughs]. How was the experience for you?

RR: It was absolutely great! Touring with these guys was like touring with old friends. Rich (Jones) and I are like brothers. I’m not puttin’ that lightly either! I go back a long way with Sami Yaffa. I used to live a floor above him in New York on Ave D and 10th Street. We’ve had some great funny times! Steve Conte has played guitar on our last album and shared the stage with us on The Go-To Guy album release party. Love talkin’ power pop with that guy. He is still so excited about music, and it shows. A real rock ‘n’ roll heart. Karl (Rockfist) is the chillest, funniest guy there is and Michael (Monroe) is an inspiration. Did I wear ’em down… I dunno? They knew what they were getting into! [laughs].

MM: Your history in music is vast. What’s your knack for keeping things fresh? There must be a few things that keep that lead in your pencil!

RR: There is always something to write about. Always. That, I cannot see changing, so I always find myself running to that ol’ Telecaster. I am in love with rock ‘n’ roll. And will be ’til the day I die. It brought me around the world. It even introduced me to the love of my life, Justine.

The band plays a giant role in keeping things fresh. I do not have any reservations in saying I think those three are the best out there. Nick (Hughes) is absolutely creative in ways that costantly surprise; scoring whole brass sections to just singin’ amazingly and kicking ass on that guitar. I think we’ve just scratched the surface of what we can do together as well. Dan (Husayn) is an incredibly diverse bass player whose  life experience comes through every note. People talk about ‘punk’ – he lives it. He is the checks and balances of the band; makes sure that when my ideas go to hangin’ out with Van Halen all night – they are brought back a little closer to plimsolls and dive bars, if ya know what I mean? And Simon (Maxwell) is amazing right off the bat when the writing process starts. It’s him and I, really, starting things off. I’ll send him demos of the songs and he gives them their feel. Man, that guy’s work ethic… he is NOT a lazy boy!

MM: With the band on a roll, what can we expect in 2018? Online, you’ve hinted that stuff is in the pipeline. Is there anything you can tease us with or am I pissing in the wind?

RR: Well, we are gonna push a fourth album back a half year or so. Let these three have a chance to breathe; enjoy playing a bit. That said, I already pretty much have it written.

There will be a solo acoustic EP with Andy Brook in the next couple of months with some very nice guests. Tom Spencer is gonna play a big part. I always love working with Tom, he’s the master of all stringed instruments [laughs]. Working one-on-one with Andy is something I am very excited about. Not only is he a geat producer, but he’s also a killer musician. This is really gonna feel like “our” EP.

There will also be a live album released. It’s from our show at The 100 Club last Feb and all proceeds will go to Scott Sorry’s family to help them with their medical bills. I love that guy so much. He’s been there for me in the past when I needed an ear and a friend. Just the strongest, most positive guy, and we wanna do what we can to help.

MM: Thanks for chatting to Mass Movement. The parting shot is yours, whatever it may be. Go, Rags, go!

RR: Thanks for talking to me and for supporting our band with your reviews. Everything I ever loved about rock ‘n’ roll is embodied in these kinds of publications, zines and blogs. Done by people with their heart in it for people who believe! THANK YOU!!! 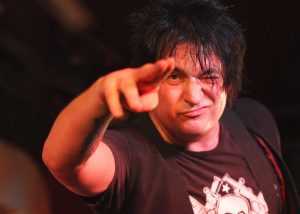 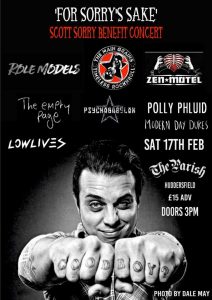