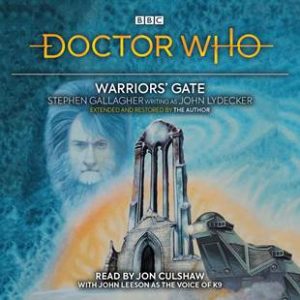 “What’s so improbable about tossing a coin…?”

BBC Audio announced an exclusive audiobook edition of Doctor Who: Warriors’ Gate by Stephen Gallagher, based on the author’s original, never-before-seen version

Jon Culshaw reads this iconic novelisation of a Fourth Doctor TV adventure, newly restored and extended by the author.

The Doctor and his companions are trapped in E-Space, struggling to find their way back into their own universe. Arriving at an intersection, the TARDIS is invaded by a refugee of the enslaved Tharil race.

With K9 damaged by the Time Winds, the Doctor, Romana and Adric explore the strange white eternity of the Gateway, where past, present and future cross over.

They also meet the crew of the Privateer, led by the embattled Rorvic. As all parties strive to find a way out, the Doctor realises that Rorvic’s ship holds the terrible secret of the Tharils’ history, and the means of their liberation.

Doctor Who: Warriors’ Gate, first broadcast on BBC1 in 1981, was a four-part TV serial in Tom Baker’s final season as the Fourth Doctor. Notable at the time for its high-concept story and its cinematic visual style, it has subsequently become highly regarded as a unique slice of Doctor Who.

Writer Stephen Gallagher novelised his scripts for the Target Books range, under the pen name John Lydecker. Before publication, however, the book was substantially reworked and reduced in length. Ever since, Doctor Who fans have speculated about what the original manuscript might have contained.

Now, for the first time, Stephen Gallagher has reassembled that original manuscript from his original paperwork, enabling listeners to experience the novelisation as he originally intended it, substantially longer and with significant structural changes. This version also now better reflects the author’s original vision for the TV episodes.

Stephen Gallagher says: “I couldn’t be more delighted with the way it’s all worked out. Performed by Jon Culshaw, with John Leeson reprising the voice of K9, it’s feeling more like a resurrection than a reconstruction.”

Doctor Who: Warriors’ Gate will be released by BBC Books on April 4th 2019 and is available for pre-orderhere