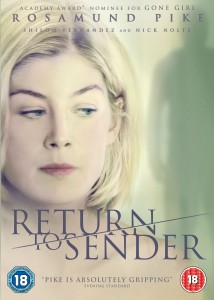 Return to Sender (Arrow)
No, this isn’t an Elvis biopic (unfortunately), it’s a quietly lurid rape/revenge potboiler. Without dropping too many spoilers, a nurse is raped in her own home by a stranger, and then, much to her father’s dismay, strikes up a relationship with said rapist in prison, which continues and gathers momentum when he’s released. Of course, all is not quite as it seems, and without giving too much away, there are ulterior motives at play, which anyone with half an ounce of imagination will be able to second guess. That said, the predictable ‘twist’ still carries a certain amount of power when it finally arrives, and the trashy concept is counterbalanced by taut performances from Rosamund Pike as the nurse, Nick Nolte as her father, and Shiloh Fernandez as her assailant. This won’t be winning any awards, and certainly doesn’t merit repeat viewing, but it plays out as a decent enough psychological drama that keeps you watching until the end, and I’m sure Rosamund Pike’s star turn in Gone Girl will entice a few curious viewers, who may well be appalled to see her in what is basically an underplayed, infinitely more restrained take of I Spit On Your Grave! Ian Glasper