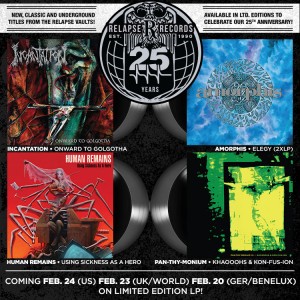 Watch a Trailer for the Vinyl Reissues HERE

2015 marks the 25th anniversary of renowned independent heavy music label, Relapse Records. Late last year, the label revealed numerous special plans to commemorate the milestone including an extensive reissue campaign of many of their classic and underground titles on deluxe vinyl. Now the first string of titles has been revealed for release on February 24th.

First up is AMORPHIS‘s watershed album Elegy on 2xLP. Originally released in 1996 and out of print on vinyl for almost 20 years, Elegy saw the Finnish death metal giants expand their signature sound into uncharted territories. A captivating blend of progressive metal, lush atmospherics and traditional Finnish folk elements, Elegy is considered by many to be the revered band’s most accomplished album to date.

Also coming to vinyl for the first time ever is the final recordings from cult Swedish avant-garde, progressive death metal band, Pan.Thy.Monium, entitled Khaooohs & Kon-Fus-Ion. Pan.Thy.Monium. was the brainchild of Dan Swanö (Edge of Sanity, Bloodbath, Witherscape) and Khaooohs & Kon-Fus-Ion, originally released in 1996, is a thoroughly complex and brilliantly bizarre extreme metal classic.

Finally, INCANTATION‘s legendary, soul-devouring death/doom debut, Onward to Golgotha, originally released in 1992, will once again be pressed to wax. Out of print for the last five years, and one of Relapse’s first releases, Onward to Golgotha remains one of the most blasphemous, harrowing, and uncompromisingly heavy death metal records to date.

All of the reissues, along with every Relapse title from 2015, will be pressed on various colors including a special silver anniversary edition available only at Relapse.com. A trailer showcasing all of the vinyl editions is viewable HERE while pre-orders for all four reissues, including brand new Human Remains and Amorphis shirt designs are available at this LOCATION.

Pre-Orders For All Four Reissues Are Available HERE.