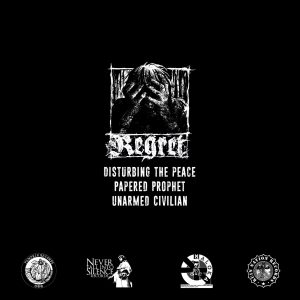 Long awaited debut release from the Bristol/Welsh combo featuring ex members of Ephemeral Foetus, and Bring To Ruin; and boy was it worth the wait. 3 tracks, kicking off with ‘Disturbing The Peace’, and almost straight away you can hear the influence of Neurosis (‘Souls At Zero’ era) both vocally and musically. The restrained, haunting intro of ‘Papered Prophet’ lulls you in to a false sense of security before the band switch gears and belt out a prime slab of Crust Punk with a nod to the Scandinavian sound of Wolfbrigade. Closing track ‘Unarmed Civilian’ drops the pace down to a sludgy crawl for half its length before ramping it only to bring it back to its sludgy conclusion. Excellent stuff; now bring on the album. Ian Pickens