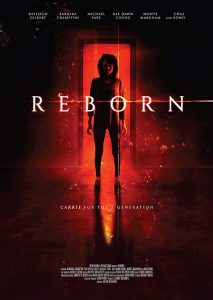 After being electrocuted back to life as a still born baby at the morgue, Tess lives fifteen years of her life with mortician Ken Stern (Chaz Bono), before discovering she can manipulate electricity, and setting out to find her real mother.

Her mother is a fading actress played by Barbara Crampton, (known only to me as Megan Halsey from Re-Animator). When her therapist suggests she close some doors on her past by finding out exactly where her dead daughter was buried sixteen years ago, she grabs her quite weirdly to-hand death certificate, and with the help of a jaded old detective love interest, starts digging.

At the same time, Chaz Bono gets letching on Tess at her suitably weird and depressing non-birthday party, which is how she discovers her ability to do hideous and painful things with only her mind, and the electric current running through his hearing aid. After that she goes looking for her ma, leaving a trail of death and destruction in her wake.

At times, this film is a very difficult watch. It’s a lot of Carrie, and a bit of Christine, which makes it pretty obvious where it draws its influences from, in a sort of late night TV-movie way. Having said that, there’s nothing wrong with a late night TV-movie, as long as it doesn’t take itself too seriously. Barbara Crampton is likeable as the salty but soft Lena, and the occasional shades of dark humour help make this more than it might otherwise be.

Kayleigh Gilbert does her best as Tess, but in all honesty seems a little too old and socialised to be playing a shut-in just turned sixteen year old who’s been getting crept on by her “brother” in a house with their mother’s long dead body, this time ringing the Psycho bell, as well as the fact her massive barnet seems to serve as a comedic metaphorical indication of her high voltage nature.

The various electrical deaths (please feel free to take Electric Death as your band name, just pay me later) in this film are great though, and that’s where the treats lie. I don’t want to spoil it for you here, but basically, if you have an electric car, just mind who you’re pissing off.

Reborn is little bit too obvious and made up of a patchwork of things most discerning horror fans will already have seen, but it does have just enough shards of original brutality to stop you giving up. It’s just a shame there aren’t more of those. Sophie Francois